Eating Ourselves Stupid in the USA – Chelsea Market, New York

We ended up at Chelsea Market on the first afternoon after we arrived in New York from Philadelphia.  It had taken us (MS not me) about 2 hours to drive from Philly to our rental car drop off point in the middle of Manhattan.  Driving through New York was something that I had been nervous about for weeks leading up to the actual event but MS did an absolutely stellar job.  Not only was he met with absolute wall to wall traffic when we arrived in Manhattan after a long drive through the Lincoln Tunnel but he drove straight through tourist mecca Times Square and didn’t even get honked at once in our Corolla with Florida plates.  I was so proud, and extremely relieved! 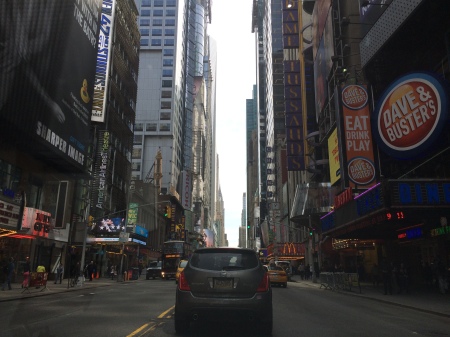 They see me rollin, they hatin’…..

Chelsea Market was somewhere that I had penned in to go and was close to the High Line – another famous New York attraction which is a disused railway line that has been turned into a public space.  It’s a pretty cool and popular place to walk along but the wind whipping through there was frigin freezing and we were a little unprepared in terms of winter gear so we didn’t stay too long.  Chelsea Market is open 7 days a week from 7am till 9pm.  Apparently it was known as one of the greatest food halls in the world so I was more than excited to check it out.  Despite the accolade of being one of the greatest food halls I found it to be one of the most disappointing food halls I have been to of late.  With only 35 food vendors I guess I was expecting a little bit more – that’s not to say that we didn’t eat anything there.

One shop that stuck out to me was a busy place called Beyond Sushi – an all vegan sushi restaurant.  Now anyone that pays attention to my blog knows that I couldn’t give a rats a** about whether food is gluten free, dairy free, vegetarian, vegan, paleo or whatever the hell other food trend is going on these days.  All I really care about is that it tastes good and Beyond Sushi more than delivered in the taste department!  If there’s one thing Westerner’s know how to do it’s take one of the oldest forms of traditional food and completely destroy it so it has little to no resemblance to traditional sushi.  Hey I’m all for tasty delicious sushi but if you have ever been to Japan sushi is a very different affair – they don’t even use avocado!

I ordered a roll of the Spicy Mang with Black Rice, Avocado, Mango, English Cucumber and Spicy Veggie Sauce and the Pickle Me with Six Grain Rice with Gobo, Carrot, Pickled Daikon, Avocado and Carrot and Ginger Sauce.  I was blown away by the presentation and also the flavour these little rolls packed.  Even better was what I thought was a one off shop in Chelsea Market actually had a couple more shops scattered across New York which MS and I visited a few days later.

On our way out we spotted the Cull and Pistol Oyster Bar which looked like a fab place to sip vino and eat a plate of oysters (my favourite thing to do) but alas the wait to get in was well over 45 minutes so we didn’t hang around.  Instead MS had a soft shell beef brisket taco from the Los Taco’s No.1 stall which was bustling with people hungry for Mexican food and also managed to squeeze in a Nutella and Strawberry Crepe from Bar Suzette Creperie while I happily ate my non-traditional, super Westernised vegan sushi.

There was a cool bakery called the Fat Witch, a Seafood Market called The Lobster Place that was full of Chinese but seemed a little pricey to me and even an Aussie inspired stall called Tuck Shop which served Australian meat pies, sausage rolls and strangely enough brussel sprouts and kale salads.  I don’t know it just seemed like half of the market was either closed or under construction to me.  Would I go back to Chelsea Market?  Probably not – for the distance we travelled to get there it just seemed a little tired, touristy and lacking of the kind of food we both wanted to eat.  If you’re headed to the Meatpacking District then sure, check it out but don’t make it your ultimate dinner destination like we did.

Has anyone else noticed that the plates at Sushi Train are getting smaller and smaller as the prices are getting bigger and bigger?  I mean this isn’t really something new but come on it’s getting beyond a joke now.  It hardly seems worth going there anymore…   Except for the fact that their sushi is so damn delicious (Salmon Ikura Ship come at me!).  No, but seriously Sushi Train, could you please go back to making sushi that’s actually more than half a mouthful?  Yours Sincerely, foodvixen x

If there was ever a time to go to Sushi Train at Cairns Central and eat to your hearts content, today is the day. Salmon Ikura ship eat your heart out!