Last Friday night while trying to avoid the usual Friday night town affair two of my good friends and I ventured into the city in search of somewhere to go for dinner.  As we wandered aimlessly along Spence St tossing up a few places in and around that area to dine at someone suggested the Swiss Inn.  The Swiss Inn is actually a restaurant that I regularly drive past and continue to say ‘I must go there one day’ so on this particular day we went there.

On arrival we were greeted by a gentleman by the name of Peter who ushered us into the restaurant area and told us we could have the pick of all the tables since we were the only ones there.  I thought it was a bit of a disappointing turnout for 7pm on a Friday night but as we ate our meals a few more people did turn up.  Peter gave us our menus and we ordered some drinks.  Ever the wine drinker with dinner I ordered a glass of Giesen Sauvignon Blanc while LL stuck with a glass of coke (in preparation for OctSober) and AL asked for some recommendations for a bottle of red wine.  Peter recommended a bottle of Cimicky Shiraz from the Barossa Valley which AL promptly ordered.  We looked around at the decor of the restaurant which is rather dated with white lace curtains that could only be described as vintage and the fake plants hanging in baskets in each of the corners.  But all this along with the candles burning on each of the tables and the booth in the corner added to the overall atmosphere and made the whole restaurant feel really warm and cosy (in a non-temperature kind of way).

As we perused our menus LL was delighted that snails were on the entree menu and I too was just as delighted that he decided to order the 6 De-Shelled Snails Covered in Garlic Butter, Grilled and Served with Garlic Toast (AU$12.50).  This is another case of ‘I have always wanted to try snails but never gotten around to it’ but at the same time I wasn’t game enough to order snails for myself.  For his main LL ordered the San Dominican Rabbit which is White Rabbit, Artichokes and Black Olives cooked with Herbs and White Wine (AU$29.50).  Seated in front me AL skipped the entree and went straight for the main ordering the Crumbed Pork Fillet Filled with Swiss Cheese, Lean Leg Ham and Pan-Fried ($29.50) or as its more commonly known ‘Cordon Bleu’.  Peter also recommended a side of Spaetzli (small egg-noodle dumplings) to go with AL’s Cordon Bleu.

I was almost sold on the duck until I turned the page and spotted the Traditional Swiss Cheese Fondue described on the menu as a Combination of Imported Swiss Cheeses, melted in Dry White Wine and served with Cocktail Onions, Gherkins and Crusty Bread (AU$37.00).  On ordering our mains Peter informed us that all main meals received a complimentary salad bar and bread.

While waiting for our mains LL and I ventured over to the Salad Bar and helped ourselves to the selection of, um, salads.  There was a nice little array of salad type things to choose from – a bean sprout salad (not my cup of tea), beetroot salad, boiled eggs, cucumber salad, a type of Greek salad, marinated artichokes and green salad.  The boiled eggs and artichokes got my attention and I ate them while I awaited my fondue.

It didn’t take long for our meals to arrive, LL’s snails came first in a ‘purpose built’ porcelain snail dish and Peter told LL that because the snails were a little small he got 12 snails instead of 6.  We were all happy with that explanation as AL and I reached over for a snail each to try.  They were very nice and I really couldn’t taste much of a difference in the taste and texture between a garlic snail and a garlic prawn.  I decided that I would order them if the opportunity ever arose again.  LL ate the rest along with all garlic butter sauce mopped up by the garlic toast.

My fondue arrived almost at the same time as LL’s snails because I guess it is kind of a mixture between an entree and a main, although I had made it my main.  The fondue came out with little squares of toasted crusty bread, as well as cocktail onions and gherkins.

In hindsight I probably should have ordered the Beef Fondue Bourguignonne which includes beef tenderloin because my dish was really just melted cheese with bread.  It was nice but not really worth the $37 that I paid for it, still there was plenty for the three of us to munch on and I was pretty full afterwards.  Having said that the cheese wasn’t too heavy even as I was scraping the bottom of the dish for the very last bit.

Peter bought out the two remaining meals –  LL’s rabbit and AL’s Cordon Bleu.  LL was extremely pleased with his rabbit and even shared a bit with his dining buddies to try since I have never tried rabbit and well AL just wanted some.  I didn’t mind the rabbit but I found the colour of the meat a little bit off putting.  It had the texture of chicken but didn’t taste like chicken.  It was however plump and juicy and as I have been informed rabbit tends to be tough and gamey.

AL however has given me a blow by blow account of his encounter with his Cordon Bleu, enough so that I feel it is necessary to let him extend his creative flair over his Swiss Inn experience on this post.  ‘The first bite was succulent enough to know I was in for something special. Each layer of the Cordon Bleu was perfected in the amounts used, the way it was used and the combination of the ingredient with the other ingredients.  The Spaetzli had it’s own unique flavour that didn’t overpower the original dish and created a perfect side dish that stood on it’s own merit.  We enjoyed tucking into it long after the main dishes were finished’.  There you go.  Speaks for itself really. 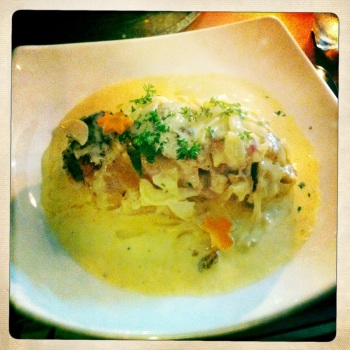 To conclude our Swiss Inn experience we shared a Creme Brulee for dessert with ice-cream on the side.  The Creme Brulee dotted with clearly visible vanilla beans was fluffy, decadent, not too eggy as you can find with some Creme Brulee’s and presented oh-so beautifully.

When we first sat down at our table I asked Peter how long the Swiss Inn had been open for because it seems to have been around ever since I can remember.  He informed me that the Swiss Inn had been open in Cairns for over 34 years and in that time it had had 4 different owners.  It’s most certainly a restaurant that has stood the test of time.  The service provided by our host of the evening Peter was exemplary even though we were the only people in the restaurant but his  fantastic service still did not faulter when more diners arrived.  Peter happily chatted with us and his suggestions from the wine to the best side dish to have with a main meal proved excellent.  The restaurant is cute and cosy and the food is both flavoursome and satisfying.  I might just have to go back for that Beef Fondue. 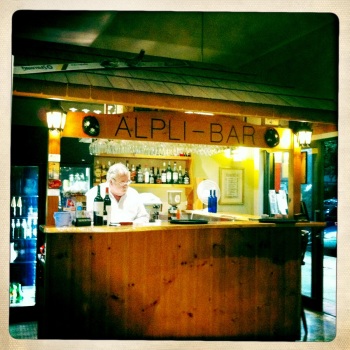 Our gratuitous host Peter at the Alpli Bar