1.  Peking Duck in Beijing – I travelled to China for the first time in 2006 and as part of the tour we were on my family and I ended up at a restaurant in the heart of Beijing.  I had never had Peking Duck before – the world famous dish that actually originates from Beijing and was first prepared during the Imperial era – nor did I know what it entailed.  The duck was sliced in front of our table by the chef and then the waitresses showed us how to eat it with spring onions, cucumber, sweet bean sauce all wrapped up in a little pancake.  The thin and crispy skin of the duck was out of this world and to this day I still dream about returning to Beijing to eat their amazing Peking Duck. 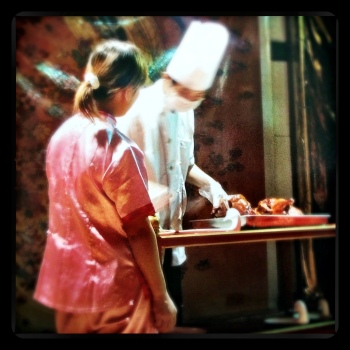 A Peking Duck Chef doing his thing in Beijing

2.  Oysters in Florida – Before the big oil spill in the Gulf of Mexico – 2004 to be exact.  My family and I did an RV tour of the USA and we stopped in at the Eastpoint Oyster House in Florida for some fresh seafood.  There is nothing my family loves more than fresh seafood – apart from my sister who only just discovered wine (yes she hasn’t quite grown up yet).  We bought 12 dozen oysters to eat between three of us – me, mum and dad.  The oysters were only US$3.99 a dozen if you shucked them yourself.  Having owned a seafood factory for many years my dad was and still is no stranger to shucking oysters.  He would also tell you he once won a prawn peeling competition against the prawning peeling ladies that worked at his factory.  What he won’t tell you is that he cheated and those ladies should have beat him hands down.  Anyway we sat out of the front of the Eastpoint Oyster House on a rickety old table overlooking the Apalachicola Bay, surrounded by mountains of discarded old oyster shells and ate dozens of Apalachicola Bay oysters straight from the shell with savoury biscuits, hot sauce and lemon.  Absolute bliss. 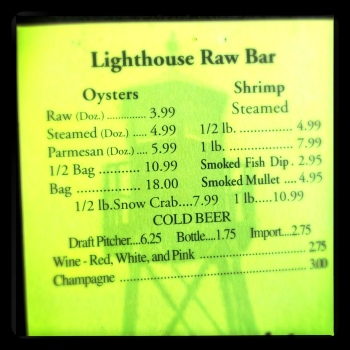 This is the best I could do photo wise so you’re going to have to use your imagination but check out those prices!

3. Chicken Biryani in Colombo – I travelled to my mother’s birth country in 2011 where I did a three week Intrepid tour with my cousin.  The first day that we arrived in Sri Lanka we found ourselves at a rundown little restaurant on the main strip not far down from the famous Galle Face Hotel.  We had no idea what to order so we pointed to what everyone else was having which turned out to be the best Chicken Biryani of my life for all of about 200 rupees (about AU$2).  Although I was the only female in there the owner made us both feel very welcome, in fact he was beside himself with excitement at having some Australian tourists dine at his humble roadside restaurant.  It was the perfect beginning to what was an amazing 3 week adventure in Sri Lanka.

Sometimes the best restaurants are the dodgiest ones 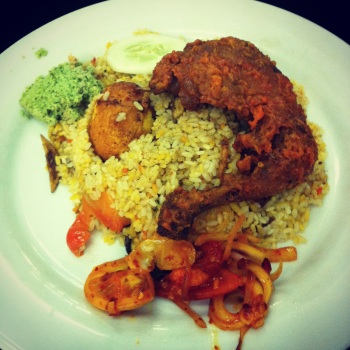 The BEST Chicken Biryani of my life

4.  Stand up noodles in Osaka – Tachigui soba is a fast food that is unique to Japan and literally means ‘standing up eating’ soba noodles.  I first travelled to Japan in 2009 where my friends and I stumbled upon a tiny Tachigui soba bar in the Osaka suburb of Fukushima (no not that Fukushima).  The four of us crammed into the noodle bar on a cold and wet day and slurped our steaming hot bowls of noodles with a couple of friendly Japanese business men who found it all highly amusing.  It was my first introduction to stand-up noodles and I made sure that I returned to this very place in my most recent trip to Japan in November last year.

Who could resist steaming hot soba noodles served by this lovely lady?

Others moments worth a mention are gobbling up cherries the size of a baby’s fist at the Salamanca Markets in Hobart, baby back ribs in a dingy bar in Nashville, a birthday picnic organised by my love MS and courtesy of Davy at Mama Coco at Lake Eacham, a 10 course degustation atop the Rialto in Melbourne at Vue De Monde also with my love, xiao long bao amongst Chinese breakfast-goers in Shanghai and fish and chips on Bondi Beach in Sydney.  I could go on forever here because I have had some truly memorable foodie moments in my travels.  As you can tell I love food and I love travel but this was only supposed to be a relatively short post.  Now it’s over to you x