JUST A LITTLE RANT: I have been following the food trends down south via the Qantas Magazine, Delicious Magazine, Gourmet Traveller Magazine and a witty Melbourne food blog I discovered about six months ago called The Very Very Hungry Caterpillar. By all accounts from these four sources it seems that there are quite a few food trends that Cairns is missing out on. Well, lets see there is the hotdog one, the Mexican one (no I don’t mean Montezuma’s and Cactus Jack’s) and now the Dim Sum one? I don’t now what food trend Cairns is stuck on but I am pretty sure we are still stuck back at the Macaron or the Cupcake somewhere. I recently read about a place in Melbourne called Wonderbao that has people queued out the door for these things called ‘Baos’, which I am pretty sure are the same thing as a Steamed Pork Bun. Since reading about Wonderbao and it’s wonderous ‘Baos’ I have made it my life’s mission to go to Melbourne and eat a Roasted Pork Belly Bao. I don’t just want one, I need it. Apparently this Bao trend is not only a Melbourne thing as I recently found during a work trip to Brisbane. 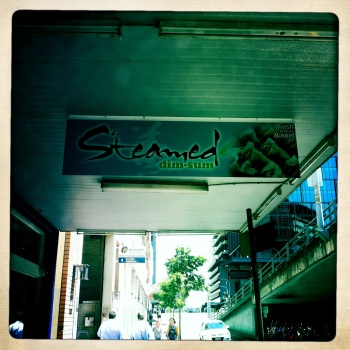 Upon researching just where and what to eat in the city of Brisbane I stumbled across a review of a place not too far from where I was staying in the city called Steamed. After reading up on it a little more I was overjoyed to see that Steamed not only had Bao’s but it also had dumplings on the menu. A combination? Well roll me in dim sims and call me Mrs Chang! So the next day after knocking off early (who am I kidding we knock off early every day) I hurried my little feet down to Turbot Street and found myself at Steamed. It was a sparse but busy little place with office workers strolling in and out carrying armfuls of dumplings and Bao’s no doubt to take back to the office. There was even a woman sitting off to the side making fresh dumplings with a large ‘vat’ of mixture and a stereo, not just any old woman, she worked there. 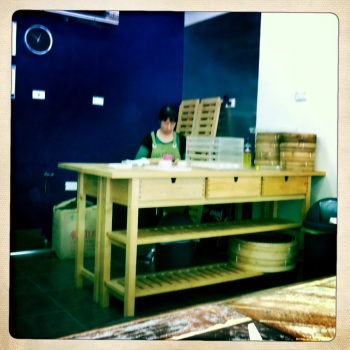 On the menu they had three different flavours of dumplings to choose from and Pork Cloud, aka Bao, aka Steamed Pork Bun. Whatever it was, I wanted it! I had been for a run that morning and I deserved it (at least that is what my friend TW would say as she shovels a cupcake into her mouth). I chose a sample of the three types of dumplings and a Pork Cloud for around the $10 mark and took my seat at the bench to devour my freshly steamed delights. A man sat down across from me and started talking to me about my dumplings and my Cloud. I shot him a ‘You are ruining my oriental experience here goddammit’ look and politely told him that I wasn’t from Brisbane. I think he got the picture. Since when were Brisbane-ites so damn friendly anyway. I figured none of them since not one person had said good morning to me on my run (damn rude city people) and I nearly got hit by a bike rider – I swear that guy came out of nowhere! Sheesh. 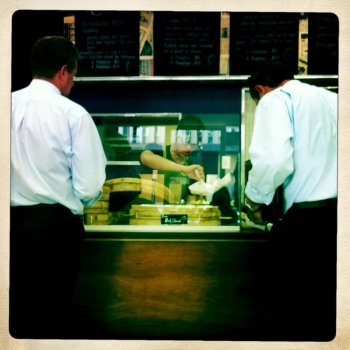 Anyway back to my dumplings and Cloud. The dumplings flavours were: the Harbin Pork with Chives, ground Pork and diced Ginger; the Lovabull with Red Onion, Ginger, ground Beef and spices; and the Zen with Shitake Mushrooms, Chinese Cabbage and seasoned Tofu. I have to say that I didn’t particularly like the Lovabull flavour. The Red Onion just tasted nasty and I think that I make better dumplings at home. I did however really like the vegetarian one with the Tofu in it. It was super yummy and I kinda wished that I had more of those ones instead of the other two flavours. I wasn’t too impressed.

My selection of dumplings (AU$10)

My Cloud however was fluffy and delicious. It didn’t have Roasted Pork Belly in it like I had been dreaming about but a rather tasty mixture of Pork, Ginger and Shallots. It was good but still didn’t satisfying my yearning for Wonderbao. At least I had come just that little bit closer. Yeah I know, I know we have Golden Boat where they have those Yum Cha trolley’s they drag around and you get to choose what want off of it. They have Steamed Pork Buns there I know but it’s the novelty of having a whole shop dedicated to steamed goodies with meat in them! Oh god! 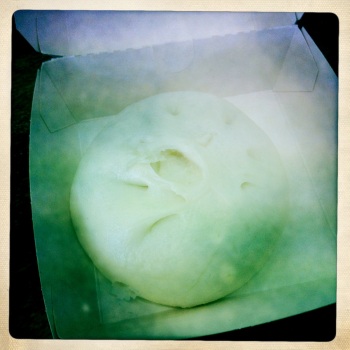 My Cloud with Pork, Ginger and Shallots (AU$3)

In my Foot Falcon searches of Brisbane City and the Valley for the perfect cute dress I spied many a bustling Mexican eatery, two in particular Mad Mex and Guzman Y Gomez. I was already well aware of the Mexican food fad that had swept through Melbourne. (MS if you are reading this, please take me to Mamasita one day… I’ll be your best friend?) Apparently it’s sweeping through Brisbane now and while getting my hair done at Toni and Guy the entire salon gushed about how amazing Mexican chain eatery Guzman Y Gomez was and how they ate there nearly every day. I thought to myself ‘Holy sh*t I need to get to this damn Mexican place and fast!’ But alas, I already had a stomach full of dumplings and Cloud, no matter how far I had run that morning I did not deserve to eat Mexican as well as a Cloud. The girls claimed that the place is queued out the door most days and it has taken the city by storm. I was most upset that I wasn’t going to get to try one of these amazing burritos before I flew back to Cairns the next day since I already had dinner plans and I wasn’t eating a burrito for breakfast. And again, I know, I know we already have Mexican eateries in town, the likes of which I mentioned earlier but um ‘Hello’? Do you see anyone queuing out the door to go to these places? Never. I am really surprised that Montezuma’s is even still open because there is never anyone there. So if I am hearing about people regularly queuing out the doors to get their hands on a Quesadilla and hairdressers gushing about this so called gourmet Mexican food at Guzman Y Gomez then it must be good right? To tell you truth I think I was more upset that I didn’t get to see just what all the fuss was about rather than not getting to try a burrito. Now I have also made eating at one of these Mexican eateries my other mission in life. Yep, I’m certainly driven to succeed.

I have to admit it I love a good food trend and I guess I probably enjoy the novelty of it more than anything else but what upsets me is the fact that all these food trends happen everywhere but Cairns? Any why does it take us so damn long to catch up? I mean I know Townsville is still back in the stone age, they only just got a Myer for Pete’s sake so at least that makes me feel a little better but if they get a Mad Mex or a Guzman Y Gomez before we do then I am gonna lose my sh*t. For real yo. Do I really have to fly all the way down to Melbourne or wait for my next work trip to a capital city just to enjoy some decent Mexican food or visit an eatery made up entirely of dumplings and clouds? I am waiting with baited breath hoping that one day, just one day they might make their way up to little old Cairns and I can have my Bao and eat it too.