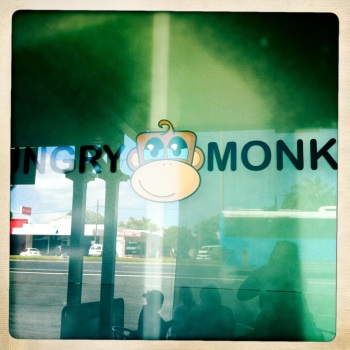 After a tip-off from a friend of ours SBD, MS and I headed to a little cafe on Mulgrave Road called Hungry Monkey.  I had seen it many times before whilst driving past but never managed to get in there until it came highly recommended.  My sister’s boyfriend also claims that Hungry Monkey makes the best Brekkie Wraps in town for around the $9 mark.  I can neither confirm nor deny that since I am not in the habit of ordering Brekkie Wrap’s nor do I get out of bed early enough to warrant one lately (I’m on holidays at the moment – till January).  We went in to check it out one afternoon and see what they had on offer for lunch.  They have a huge variety of wraps, burgers, salads, smoothies, milkshakes, meal boxes and a few other things to tantalize your taste buds.  After way too much umming and ahhing and a stern “hurry the f*ck up” look from me MS decided on the Pizza Works Wrap with Leg Ham, Salami, Onion, Cheese, Tomato Relish, Pineapple (which he took off), Red Pepper and Olives for AU$8.90.  According to SBD the Mackerel Wrap was the business but  I simply couldn’t go past the Firebomb Wrap with Crumbed Chicken, Chilli Sauce, Lettuce, Cheese, Tomato, Red Onion and Jalapeno’s (AU$8.90).  It was the Jalapeno’s that sold me.  I only discovered them about a year ago after finding out that they did in fact taste absolutely nothing like capsicum and haven’t been able to live without them since.

Get in my belly

Hungry Monkey seems to do a pretty steady lunch trade from workers in the vicinity with a few venturing from across the road to get their hands on some lunch fare and the ones driving in, like us.  We waited about 10 to 15 minutes for our wraps since we had arrived around peak lunch trade time but we weren’t disappointed when they arrived.  MS decided that he was getting a side of fries with his which I managed to steal a few of.  He hoed into his Pizza Wrap which was toasted on the outside and I could see the melted cheese within.  It looked pretty damn good from where I was sitting (right next to him).  He loved his Pizza Wrap.  I think I recall “Man this is so good!” escaping his mouth as he took another bite.  He also reckons that the fries were the best he has had in a long time.  They had just the right amount of salt and crispness about them.  I had a few and they were pretty good even without BBQ sauce.  That’s a big call since I am usually a sauce fiend and don’t go near a chip without it.

I was actually surprised at just how heavy my wrap was even before I unwrapped it.  They certainly weren’t stingy on the ingredients at Hungry Monkey and just for a change (like with a lot of other cafe’s) the wrap wasn’t full of lettuce because I ordered mine without.  Something about Iceberg Lettuce that just doesn’t sit right with me.  It tastes like leaves (ew).  And when it gets all warm from being toasted it tastes super nasty (again, ew).  The Crumbed Chicken was freshly cooked and wasn’t pre-cooked earlier and reheated like at Subway.  It was real chicken and it was crunchy and succulent.  The Jalapeno’s were awesome of course but the best thing about it was the decent size of the wrap.

The service and staff at Hungry Monkey are friendly and efficient and the food is very reasonably priced but so damn tasty and with so much to choose from!  You do have to wait a minimum of 5 to 10 minutes for your food since the place does get quite busy around lunch time but in the grand scheme of things that’s stuff all to worry about when you are getting yummy food made fresh to order.  Mine and MS’s wraps were so damn good the first time that we have been back twice since then and although each time I go with the intention of trying something different off the wrap menu (I really want to try the Salt and Pepper Squid Wrap) I just can’t seem to tear myself away from the Firebomb one with the Jalapeno’s.  I know that I am onto a good thing here so why change it?  Forget the kebab shop you’ll go bananas for Hungry Monkey!

Posted on November 16, 2012, in Cairns and tagged Cheap Eats, Eat in or takeaway, Lunch. Bookmark the permalink. 1 Comment.