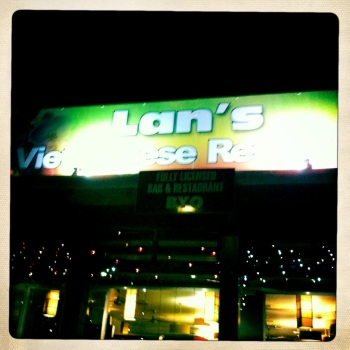 Last Saturday my friend RS and I were looking for somewhere to go for a cheap feed and decided on (well I decided on) Lan’s Vietnamese Restaurant after hearing a few good things about it on Facebook and via other online sources (Trip Advisor).  My Lan’s Vietnamese Restaurant Table 52 card may have also had something to do with my selection.  Being a BYO (Wine Only) Restaurant I asked RS if she would like to get a bottle of wine for herself and I would be the designated driver.  She politely declined and after a big night a few nights earlier on a nasty spirit starting with T and ending with Ila I also opted for the water.  We arrived just after 8 at Lan’s to find the restaurant about a third full.  After a little bit of confusion from the two waitstaff as to who was going to seat us we were shown to a seat at the front of the restaurant, right near the entrance.

The waitress that claimed us fetched some water and some glasses and bought us some menus.  RS and I had a lot of catching up to do after a slight falling out between us late last year but we were moving on with a friendly Saturday night dinner pretty much picking up right where we left off.  In between catching up the waitress came over a few times to ask us for our order but neither of us had had a chance to even glance at the menu yet.  The waitress wasn’t bothered and I told her that I would let her know when we were ready.  We both had a look at the menu and I have to say that nothing on the menu interested either of us in the slightest.  It all sounded very boring, so much so that RS pulled a 2-4-1 meal voucher out of her bag for another restaurant in town and asked if we should go there instead.  I figured that since we were here already and seated with water that we should give it a try.  Eventually I gave the waitress the old ‘nod’ and she came over and took our order.  We both decided to skip the entrees and went straight for the mains.  RS ordered the Vietnamese Chicken Ginger and Rice for AU$18.50 and I ordered the Stir-fry Chicken Lemongrass and Rice (AU$18.50) from the Special’s Menu that surprisingly (much like the specials board out the front of Fetta’s) hasn’t changed since I dined at Lan’s well over 6 months ago.  According  to the menu the Stiryfry Chicken Lemongrass is ‘cooked with love’ so I figured it must be good!

We waited about 10 minutes for our meals to arrive which is almost too quick but hey there isn’t much to a Stir-fry Chicken, really.  The meals looked very similar except my Stir-fry Chicken Lemongrass was darker in colour than RS’ Vietnamese Chicken Ginger.  Each meal came with a large plate of rice.  A plate that I thought was much too big for me when I saw it but typically I ate the lot as did RS.

We both dug into our meals sharing a little so we could each taste what the other had ordered.  RS told me she didn’t care much for my Chicken Lemongrass because it was too salty while I told her I didn’t care much for her Chicken Ginger because it was too bland. RS enjoyed her meal although she did say that it was nothing special and she also managed to pull a couple of ‘questionable’ looking pieces of chicken out of it and put them on the side.  To me her meal had almost no flavour at all except for a few slivers of fresh ginger stirred through it.  She did however finish the entire meal.

I enjoyed my Chicken Lemongrass but I do have to admit that it wasn’t anything special and it really was very salty but then again I would rather it be salty than taste like nothing.  It really just looked like something that had been carelessly thrown together, not like something ‘cooked with love’ as stated on the menu.  I did finish it and minus a few stray bits of capsicum that I pushed to the side (another vegetable I’m not fond of). 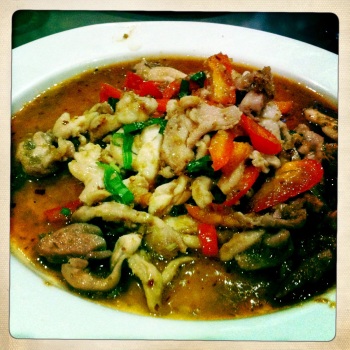 I have to say after two occasions of dining at Lan’s (I didn’t write about the last one) I am really not very impressed at all.  The service is good yeah but the food is very ordinary and the atmosphere is terrible.  I can’t put my finger on why but it’s just feels very sterile.  There is more atmosphere at the Nightmarkets food hall.  I am assuming that the majority of the customers that dine there are staying at the Discovery Resort that Lan’s is attached to.  In the end I can’t really complain since the meal did only cost us just under AU$10 each but the fact that the menu was so undesirable that we nearly left in search of somewhere else to eat is pretty bad.  The only thing that’s going for it really is the ‘BYO Wine’.  Our decision not to drink is a decision that RS and I probably should have reconsidered.

Posted on June 15, 2012, in Cairns and tagged Dinner, Eat in or takeaway, Table 52, Vietnamese. Bookmark the permalink. 2 Comments.