A few months ago AA and I met some friends for a couple of drinks at Wink II upstairs at the Mantra Esplanade.  As we arrived a little earlier than expected our friends were still eating their main course of Slow Braised Beef Cheeks with Pumpkin and Brown Onion Puree, Garlic Mustard Seed Mashed Potato, Topped with Orange Roasted Carrots and Port Wine Red Sauce, which they insisted we try.  Last week AA and I were contemplating just where to go for a ‘classy’ Friday night dinner with friends when I suggested Wink II.  Both AA and I instantly recalled the Beef Cheeks that we had tasted on that memorable night a few months back and agreed that this was where we should go.  On arrival at Wink II we were greeted by a friendly waitress who escorted us to a table for four that we had booked on the balcony.  Most of the balcony was taken up by other diners however the restaurant did seem a little ‘unoccupied’ for 7.30pm on a Friday night.  Water was poured and drinks were ordered, however this did take a little longer than usual as there seemed to be a little bit of confusion as to just which one of the four waitresses was actually in charge of our table.  In the end it seemed that in fact all four were in charge of serving our table which was a little overkill as I would prefer just to have one waitress to deal with since it does help to personalise the whole overall dining out experience.  Moving on…. 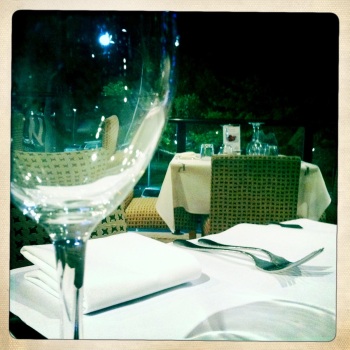 At Wink II they have a set menu for dinner to choose from as well as an a-la-carte menu but since we noticed that a lot of the menu items that are on the a-la-carte menu are also availabe on the set menu we all opted for the two course set menu for $39.50 per person.  Pretty damn good deal I think, plus the Beef Cheeks were featured of the list of available mains for the set menu so I was ‘in’.  We ordered our entrees, mains and desserts in one hit and anxiously waited for our first meal to arrive however before our entrees came out we were each brought a ‘palate cleanser’ consisting of a morsel of Chicken and Avocado Puree beautifully presented on a white porcelain spoon.  It was small, delectable and really set the mood for the entrees to come.

Impressing my friend PM with the elegant but somewhat minimalistic food at Wink II (as would be expected at a fine dining restaurant) was going to be a problem considering his rather impressive appetite at local buffets in and around town (I mean it, this guy can eat).  However tonight was not about eating as much as you could eat, much to his dismay, but more about a chic dining experience with friends.  PM ordered the Wink Oysters Kilpatrick style and since PM doesn’t tend to say a whole lot the fact that he gobbled all four oysters down in record time and then proceeded to eye everyone elses entrees goes to show that he certainly enjoyed his entree.

On my left AA ordered the Local Gazpacho with Avocado Mousse Drizzled with Smoked Oil and Crispy Crouton.  On ordering the Gazpacho the waitress asked AA if he was aware that Gazpacho was actually cold soup.  As I had expected, AA being a knowledgable friend with a plethora of both useless and useful information stored in his cranium, was fully aware of this.  He enjoyed his cold Gazpacho very much and I do remember the words ‘Oh wow, this is really good’ escape from his mouth in between mouthfuls quite regularly.

To my right LL ordered the Stuffed Avocado with Spicy Creole Prawns and Pickled Watermelon, Carrot Ginger Puree and Wink Salad, which he was most pleased with.  Enough so to declare that he had in fact ordered the best entree out of everyone at the table both prior to tasting our dishes and after.

Before the arrival of our mains another palate cleanser was brought to our table but this time it was a shot glass with a small mouthful of Orange and Mango Sorbet.  No one at the table was expecting these little palate cleansers but they were certainly a nice little surprise which everyone enjoyed very much. 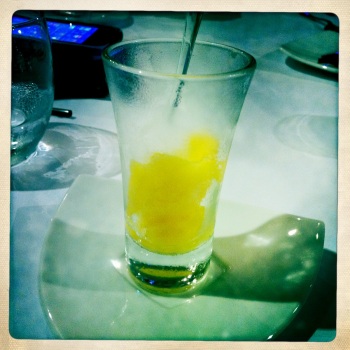 For the mains PM, AA and myself finally got to fulfill our dreams and ordered the Slow Braised Beef Cheeks with Pumpkin and Brown Onion Puree, Garlic Mustard Seed Mashed Potato, Topped with Orange Roasted Carrots and Port Wine Red Sauce.  The Beef Cheeks were just as good as we remembered except to our delight the serving size was larger than our friends had been a few months ago when we had sampled theirs.  The Beef Cheeks were so tender that they melted in my mouth and the Pumpkin and Brown Onion Puree was heavenly and hearty.  Beef Cheeks verdict = simply delicious!

LL ordered the Chargrilled Angus Rump with Crispy Potato Skins, Sour Cream and Red Wine Sauce and on tasting some of my Beef Cheeks declared ‘Your’s is really good but mine is better’.  The steak was ‘amazing’ and cooked medium rare just as he had ordered it and although that should be a given at any restaurant anyone that dines out even once a year knows that steak cooked to order is hard to find. 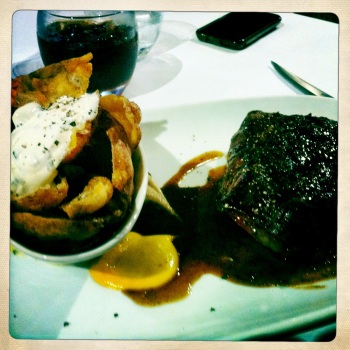 One thing that must be noted is that when your food first arrives you notice that it really is like art on a plate.  Head Chef Leon has truly and admirably mastered the skill of both aesthetically pleasing and delicious food.  As the saying goes… ‘It’s almost too good to eat’.  My friends and I really enjoyed our ‘classy’ dinner at Wink II and we were not let down by our mouth-watering memory of the Slow Braised Beef Cheeks.  The palate cleansers that were bought out between courses was both a delightful and tantalising touch to our memorable Friday night meal.