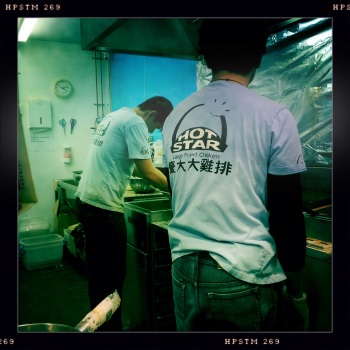 If you haven’t heard about Hot-Star Large Fried Chicken then you must be living under a rock – or in Far North Queensland.  I do understand we are a little sheltered up here in our beautiful part of the world.  Heck, the Mexican food fad that took over our southern states about 3 years ago hasn’t even reached us up in Cairns yet (and no Cactus Jacks doesn’t count).  In fact I am pretty sure we are still in the midst of the frozen yogurt phase that is so, like, totally 2012.  Being an avid reader of Gourmet Traveller and Delicious magazines thanks to my monthly subscriptions (friends and family know the way to my heart for birthday’s and Christmas) I like to think (hope) that I am pretty up to date on the food trends.  Along with Mexican food there has been cupcakes, macarons, hot dogs, anything Vietnamese, dumplings, gelato, burgers, Korean food and god knows what else! But now it’s the Taiwanese’ turn with Hot Star Large Fried Chicken.  A chicken franchise brought in by some savvy travellers which has taken the cities of Sydney and Melbourne by storm, one deep-fried chicken breast at a time. 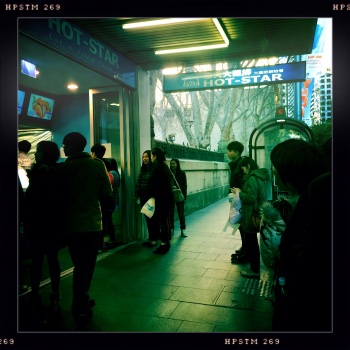 Perfect day for some hot chicken

People are lining up down the street for these Taiwanese street food inspired protein pockets.  It’s pretty basic to say the least but at Hot Star Chicken they take a whole chicken breast on the bone and smash it flat, marinated it for 2 hours, coat it in tapioca flour and then deep fry it in Cottonseed Oil till it’s crunchy on the outside and deliciously moist on the inside.  Having recently travelled to Sydney with my family Hot Star wasn’t really somewhere that I was hell-bent on seeking out but more hoping to stumble upon.  It certainly didn’t take long to spot a small crowd of people (mostly young Asian’s) huddled on the street waiting for the latest batch of chicken to be deep-fried.  Before I knew it my whole family with MS in tow was lining up to try Hot Star Large Fried Chicken.

It’s a CASH ONLY kind of gig and for a mere AU$7.90 a hit, it’s a pretty good deal, especially when it’s cooked to order – that way you know it’s fresh – freshly fried anyway.  The guy at the counter asked if we wanted Original or Spicy to which MS and I decided that we wanted ‘spicy’.  He gave us a small plastic bag and a ticket with a number and we stepped aside, laying in wait for our ‘afternoon snack’.  We waited about 10 minutes until with expert precision the guy working the deep fryer began to pull each chicken breast from the bubbling hot cottonseed oil, bag them up and call the individuals numbers of the hungry chicken lovers waiting curb side.  MS and I spotted a couple of breasts that were basted in some sticky brownish sauce and then coated in sesame seeds.  We had no idea what they were (possibly the lemon chicken?) but we both wished we had gotten that one – the grass is always greener.

Additions of deep-fried mushrooms and sweet potato chips on the menu at Hot Star also rate very high on the culinary Richter scale according to various reports on social media and other online reviews.  Those deep-fried goodies would have to wait till the next time I crossed paths with a Hot Star Chicken joint because I had to save room for dinner – even if this was classed as ‘research’.

A couple of minutes later the ‘spicy’ coating was sprinkled onto our piece and our number was called.  The pictures of it in MS’ hand just doesn’t do it justice.  This thing is seriously about a foot long and with the breast itself weighing on average 250 grams.  MS and I shared one but I could have easily polished one-off on my own despite it’s size.  I refrained because technically we had just eaten a late lunch including BBQ pork puns and Deep Fried Sesame Balls with Red Bean Paste.  Seriously those things are the best damn sweets ever invented!!!

The Hot Star Large Fried Chicken is kind of like a big chicken schnitzel crossed with KFC I guess.  It was tongue searing-ly hot having just been pulled from the deep fryer seconds before but a perfect way to warm you from the inside out on what was a ridiculously cold and windy afternoon in the city of Sydney.  The spice was spicy but nothing major.  Hey, if MS can eat it without many complaints then it’s definitely not very spicy – he is a total pussy when it comes to spice after all.  The batter was thick and crunchy and although the whole thing was encased in a little paper bag it didn’t seem overly oily.

There’s really not a whole lot for me to say about it especially considering that Hot Star Large Fried Chicken has been blogged about and reviewed to death since it opened in Australia about six months ago by people far more in the know than me.  At the end of the day although tasty, succulent and a sh*tload better than a 5 piece feed from KFC (much kinder on the wallet too), it’s really just a big deep-fried chicken breast.  Typically, MS was more smitten with the $4 slice of greasy Meatlover’s pizza that he bought from the pizza place directly next door while we waited for our chicken.  In his own words that was his ‘culinary highlight’ of our trip to Sydney.  Ah such a typical male.

Posted in Around Oz