Eating Ourselves Stupid in the USA – Katz Delicatessen, New York

For MS and I Katz Delicatessen was kind of the crème de la crème of places we wanted to go in New York because if there’s one type of food we can agree on it’s a pastrami sandwich aka The Reuben. The place that made Reuben Sandwiches famous Katz’s Deli is still the talk of the town in New York even after over 125 years in operation (it was first founded in 1888) and is hugely popular for its pastrami sandwiches and hot dogs. Some of you might remember it from the famous scene in Where Harry Met Sally where Meg Ryan fakes an orgasm but me, nah I just remember it for the sandwiches.

MS and I figured eating a Reuben Sandwich on a Friday night was the way to go so we took a taxi down to the Lower East Side and made our way along the busy street to Katz’s. As we entered the door we were handed a ticket by the door attendant. I had read many a review about Katz’s and the one thing that stuck in my mind was that we must hang onto that ticket for dear life because if we were to lose it then it’s a lost ticket fee of US$50. A bit steep but neither of us planned to lose that damn ticket. You have the choice of sitting in a particular section where you can get table service or go straight up to the servery. The huge deli is absolutely pumping with restaurant workers, tourists and New Yorkers alike – so much so that it’s a bit of a spectacle.

We both got a bit of a shock when we realised that it was almost US$20 for a Reuben Sandwich which going by the Aussie Dollar these days is about AU$30 – that’s one bloody exy sandwich – and we wanted two! If all the hype was to be believe then it was definitely worth it right? We ordered two Reuben’s from our friendly server, a small middle aged man – one with corned beef and one with pastrami. He promptly took out two enormous slabs of freshly cured corned beef and pastrami and proceeded to expertly slice pieces off for our sandwiches. He even cut us a few extra pieces for us to try whilst we were waiting.

What makes Katz’s pastrami and corned beef so special is that it’s cured using a ‘slower method which best flavours the meat, without injecting chemicals, water or other additives. Their finished product can take up to 30 days to cure whereas most commercial prepared corned beef is often cured in 36 hours (from the Katz Deli website). What the hell is the difference between corned beef and pastrami anyway? Well corned beef is brined whereas pastrami is rubbed in spices and smoked. The corned beef and pastrami is seriously unlike any that I have ever tasted before.  So juicy, so succulent and a hell of a lot better than the sh*tty corned beef and pastrami that you get from the deli at Woolies or Coles.  There’s just no comparison.  When he was done making our sandwiches the man handed us back our precious tickets and we parked ourselves at a table smack bang in the middle of the restaurant.

Photos ensued and MS was finally allowed to take a bite of the most expensive sandwich he had ever bought. After the first bite we both agreed that the Reuben sandwiches with Swiss cheese, Russian dressing and sauerkraut were well worth their US$20 price tag. No orgasms were faked during the making or eating of the sandwich but I may have been close to having a real one whilst eating my Reuben. 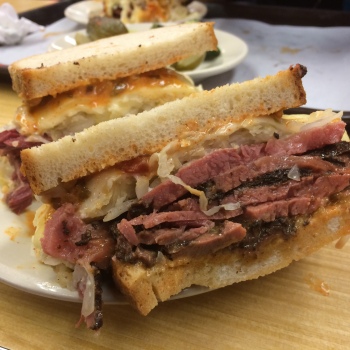 There had to be close to 300g of meat on each of the sandwiches and the rye bread was deliciously soft. It was a mean feat to finish a whole sandwich because of the sheer size but I more than managed. Seriously on my top 10 list of the best things I have ever eaten. Believe all the hype you have heard about this place – it’s well worth going to not only for the delicious Reuben sandwiches but also for the atmosphere and spectacle of Katz’s Deli.