Gelato places seem to be all the rage these days but one that’s causing quite a stir in Melbourne for it’s quirky spin on the common ice cream scoop is N2 Extreme Gelato. MS and I weren’t actually planning on going to N2 Extreme Gelato. We were driving down Brunswick Street in Fitzroy when I spotted a large queue of people out of a shop door and recognising the name (N2 Extreme Gelato) I demanded MS pull over – pretty please pull over? – so we (I) could see what all the rage was about.

There was a queue I swear!

So just what IS all the fuss about I hear you ask?  Well, at N2 they freeze their gelato on the spot with liquid nitrogen before they serve it to you.  Here’s an excerpt that I pulled straight from the N2 page explaining why they use liquid nitrogen to make their gelato…  “The use of liquid nitrogen at N2 Extreme Gelato plays on the strength of a phenomenon called nucleation-dominated ice crystallisation, it forms a large number of microscopic ice crystals in seconds, resulting in exceptionally smooth textures”.  It’s pretty much recreating the fresh flavour that ice cream has when it comes fresh off the churn.  Interesting huh?  After doing a bit of online research it seems N2 also has a shop in Sydney (the original one) and there are a couple of similar concepts popping up around Australia – such as the one in Noosa that fellow blogger Baking Myself Happy told me about, Nitrogenie.

Anyway, after seeing the lineup and considering we were still ridiculously full from brunch MS and I decided sharing our scoop of N2 Gelato was the best bet. We chose one of the flavours off the wall… the Ferrero Reveal – Hazlenut and Nutella Gelato, Rice Bubble Milk Choc Top and a Warm Milk Chocolate Ganache (the menu changes weekly). It’s cash only – typical of many places in Melbourne – and at between $6 and $8 a pop these guys are making an absolute mint. The system was pretty disorganised and erratic with names being taken from a sea of people wanting gelato within a sea of people waiting for theirs.

I went up to the side of the counter to take some photos and have a look-sie at what goes on with the whole gelato ‘making’ process.  There was a hell of a lot of Kitchen Aid type mixing appliance with plenty of cold mist rising out of them and workers completely run off their feet trying to pump out individual ‘made to order’ scoops.  It was all pretty theatrical I guess and cool to see – kind of reminded me of the whole ‘double bubble toil and trouble’ thing from Macbeth or at least the one that SS, HT and I did for our grade 10 English assignment with Miss Bagnall. 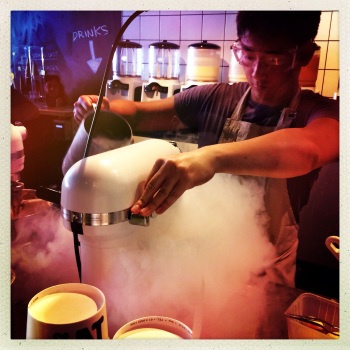 20 minutes later my name was called… “Foodvixen?” Haha just kidding. MS and I shared our melting mess of gelato and rice bubbles with it’s novelty idea of a syringe full of ganache that I guess you are supposed to inject into it. That just didn’t work for me – the idea of the syringe I mean. Here’s an idea…  You leave the syringe out of my gelato and we will make it $6 all up?  Sweet.

Personally I didn’t think the gelato at N2 was anything to write home about and neither did MS.  I also think that the whole liquid nitrogen thing is just a fad that will fade with time, just like frozen yogurt (something I still go crazy for).  Firstly, at N2 there’s the waiting over 20 minutes in a shop that’s shoulder to shoulder with people each waiting for their own gelato to be ‘made’.  I know the ‘show’ is all part of the experience but a five minute show is enough for me.  Secondly, well, the true gelato lovers are probably going to hate me for saying this but it’s just ice cream with a higher price tag (AU$8????!!! You’re frigin kidding me right?). And thirdly, the stuff is near damn completely melted by the time you get your hands on it. I know the whole liquid nitrogen thing is part of the freezing process but they need to freeze that sh*t for longer man.

Yeah the flavours are wacky, they use full cream milk and fresh cream from local dairies, real fruit and herbs and the list goes on but surely that’s a prerequisite for any good gelato place these days?  Cool concept, shitty waiting times and for me I think they aren’t really making particularly great gelato but just jazzing it up with some dry ice and plastic syringes. If you want amazing gelato without all the BS – apart from the lineup – then head a few blocks over to Gelato Messina on Smith Street – hands down the gelato shop of all gelato shops (IMO).

Posted in Around Oz