← Eating Ourselves Stupid in the USA – Momofuku Noodle Bar, New York
CairnsLife Magazine stole my photos without my permission →

Eating Ourselves Stupid in the USA – Ess A Bagel, New York

One cannot go to New York without eating a bagel – or several. In fact eating a bagel in New York (and everywhere else in the USA) became a daily ritual for us. One of the most famous places to get a bagel in New York is at Ess A Bagel which luckily enough wasn’t too far from our humble abode at the Waldorf Astoria. I’m not too sure how I heard about it but it was on my ‘must do’ list of places to eat at and we were not disappointed despite waiting in line for well over thirty minutes. The line up for the bagels was snaked through the store and out the front door (I had a video but the damn thing won’t upload).

The bagel teams assembling the bagels at the front of the store were like a well oiled machine and there were so many different ingredients to get on your bagel including 18 different flavours of cream cheese with everything from raisin walnut cream cheese to jalapeno cream cheese to chocolate chip cream cheese.  The choices of what you could have on your bagel were literally endless, so much so that I found it a little overwhelming. I tend to stick with tradition and can’t go past the Lox (Smoked Salmon as we call it) with Cream Cheese and Capers. 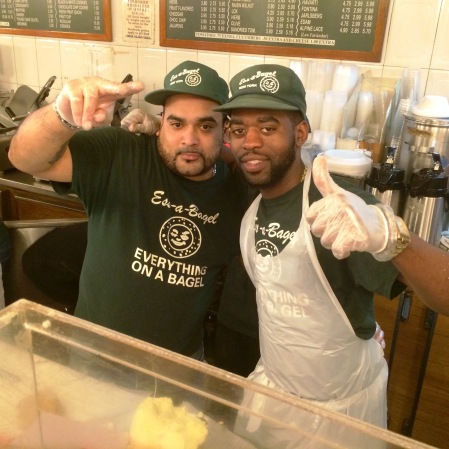 Never had I heard of lox before and it took some secret Googling in the line to make sure that it was in fact Smoked Salmon. MS went for the cream cheese with turkey bacon option with extra cheese, another tried and true tradition for him because he’s a fatty. The bagels were so fresh out of the oven they were still steaming when our expert bagel maker Gavin and his buddy Mad Rican cut them open and yet some dumbasses in the customer line still wanted theirs toasted.  WTF?!

Because American’s love variety  with their 18 flavours of cream cheese there are also 14 different types of bagel to choose from at Ess A Bagel.  You can get plain, sesame, poppy, salt, onion, garlic, oat bran, cinnamon raisin, 9-grain, pumpernickel, pumpernickel raisin, everything, whole wheat everything and bialy’s (a pastry/bagel type thing).

By the time Gavin was done there was that much cream cheese and lox on my bagel that it weighed half a pound!  That’s a whole lot of bagel!!!! It was without a doubt the best bagel we had on our trip, and we ate a sh*tload of bagels, much to the dismay of my size 9 jeans that I’m still having trouble fitting into 2 months later. It was warm, crunchy on the outside and soft on the inside with the perfect blend of lox and cream cheese and you seriously can’t beat a poppy seed bagel.  Sadly for us though we went to go back another day and the line was even longer and we had a Broadway show to catch so we couldn’t hang around and I never got to go back for another *insert sad face*. One thing’s for sure though Ess A Bagel will be high on our priority list when we do return to NYC and it should definitely be on yours!

← Eating Ourselves Stupid in the USA – Momofuku Noodle Bar, New York
CairnsLife Magazine stole my photos without my permission →