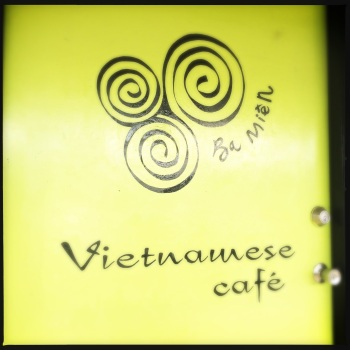 I finally managed to pull my finger out and get my ass down to the Vietnamese café on Aplin Street, Ba Mien a couple of weeks ago for lunch with one of my most favourite people to have lunch with, fellow blogger, Baking Myself Happy.  (Sorry Sandy I still haven’t made it to Terrazza.  I swear I will get there eventually haha).  BMH and I have a shared love of food, talking about food and our general intolerance for stupid people.  Given the opportunity to choose where we had lunch I chose Ba Mien, knowing that it was somewhere that was close to where BMH worked and also somewhere that I had wanted to blog about for quite some time.  BMH had actually been there quite a few times given the close proximity to her work but was happy to go again with me. 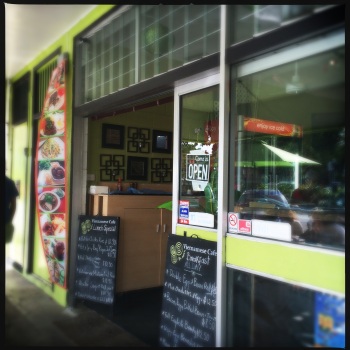 We met there just before the lunch rush which was perfect for BMH because she was a little restricted for time due to it being her lunch break also.  Myself, well when I’m not at sea I’m a lady of leisure.  That’s not true at all, it seems like the more time off I have from work the more I have to do but on this particular day I had no trips to Master’s, Bunning’s, Solomon’s Carpets or all of the above planned.

After our hello’s and a bit of general chit chat out the front of the shop we headed in and placed our orders at the counter.  BMH already knew what she wanted so she ordered first leaving me to have a bit of a longer look over the menu.  For someone who spends a lot of their spare time perusing menu’s online (hey it’s a vice of mine) for once I wasn’t at all prepared and this was in fact the first time I’d had a chance to view the menu.  Shock! Horror!  It didn’t take me long before I settled on the Lemongrass and Beef Chilli Noodle Soup ‘HUE’ Style for AU$10.90.  The lady at the counter did mention to me that it was hot but I brushed her off.  Please… I’m too hot to handle baby!  I know I have tendency to go for mainly noodle dishes but in my defence I did seriously consider the Green Crispy Papaya Salad with Coriander Dressing for AU$9.90 (another regular dish of mine).  It was the Coriander Dressing that turned me off.  I don’t like coriander, it’s just too overpowering for me.

Formerly the grease trap ‘Galloping Gourmet’, Ba Mien is cute, colourful and adorned with vibrant (but a little tacky) lime green walls and bottles of Sriacha chilli sauce.  I must admit it’s really great to finally see some Asian cuisines other than Chinese, Japanese and Thai setting up shop in Cairns.  I know for a very long time we didn’t even have one single Vietnamese restaurant in Cairns and now we have at least four that I can think of off the top of my head. 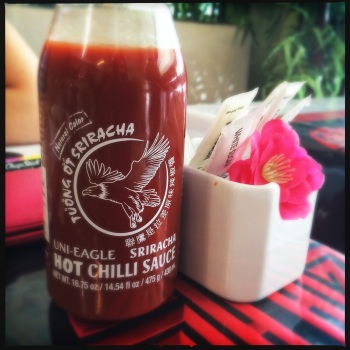 Anyway so while we waited for our food to arrive BMH and I discussed the in’s an out’s of the universe, buying houses – something the two of us are both considering with our respective partners, why Isagenix is such a farce (how the hell people are falling for the food replacement shake gimmick again especially when it’s clearly a pyramid scheme!) and BMH’s absolute horror at discovering that she may not be fitting into her dresses quite so well because she had started to develop lat’s (the muscle kind).  This part I found overly amusing especially considering how devastated she was about it all.  Being a girl with quite large ‘lats’ I couldn’t quite understand it.

Back to the Isagenix part for a tick.. I more than understand the premise behind it all – weight loss and living a healthy life but surely people would rather eat real food?  I myself can contribute a 15kg weight loss to Celebrity Slim Weight Loss Shakes back in 2006.  However the overall success of me not piling back on the pounds after I stopped having meal replacement shakes can also be attributed to the stress of my piece of shit, alcoholic ex-boyfriend and surviving (literally) on a diet of cigarettes and daily 5km runs on the Esplanade.  For the record I don’t smoke anymore and I certainly don’t condone this form of weight loss.  At the time I was a shadow of my current self both mentally and physically but we get over these things.  Enough about me… Yeah Isagenix might help you lose weight and feel great about yourself but what about the afterwards?  You can’t live on shakes forever and have to go back to eating real food eventually.  My advice is to educate yourself.  Learn to eat real food in moderation and exercise.  It’s not frigin rocket science people!!!  Am I right or am I right hey BMH?

Enough about that – It didn’t take long before our lunch to arrive at our table – I’m actually not sure if the service is always that prompt or it was just that we were the first one’s there for the lunch trade.  My guess is that it’s always prompt or there is no way that BMH would keep going back.  My noodle soup was quite large in size and stature with a bit of chilli and lime on the side.  The broth was somewhat flavoursome, mostly the chilli kind, but generally didn’t have much depth to it.  The thinly sliced beef was lovely and tender and this was the first to go from my bowl followed by the noodles which were still a little bit firm to bite.  Exactly the way they should be IMO.  I then proceeded to work down the large amount of soup in my bowl only to be faced with nearly choking on chilli.  It’s not that it was particularly hot but more it just went down the wrong way, kind of like when you breath in Milo.  THAT SHIT BURNS!!!  Tears ran down my face, I couldn’t breath and I immediately turned around casing the nearby drinks fridge for anything that may quench the choking burn.  Fortunately for me, after a sheer moment of panic, the burning subsided, I wiped away the tears and our conversation continued as per normal. 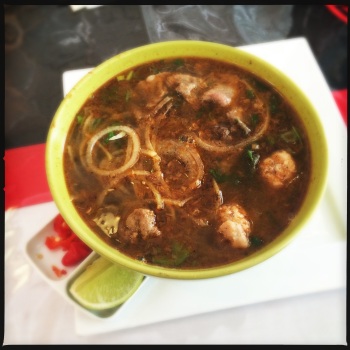 BMH’s had ordered the Lemongrass Beef Bowl which appeared a little more basic than mine.  From the Happy Baker herself “It was okay – nothing to write home about.  There wasn’t really a discernible lemongrass taste more just a generic Asian taste.  The beef was pretty chewy but really for the AU$8 or so I paid I wasn’t expecting gourmet’.  Oh, she’s gooood.

I found the food at Ba Mien to be only okay… worth the visit but nothing to write home about.  This is something that was reiterated by BMH – she would know because she has dined there a lot more than I have.  Also because as a fellow foodie, I more than trust her opinion.  Apparently it can be a little hit and miss but usually worth taking the chance on considering it’s handy location to her work, cheap meals and cheerful service.  I myself will definitely be returning for another go and to try something else on the menu other than noodle soup.  Ladies, forget cleansing with Isagenix ladies and instead try the Lemongrass and Beef Chilli Noodle Soup at Ba Mien.  Not only will it clean you out starting with your nasal passages, at a mere AU$9.90 a pop you might actually save yourself some serious coin and a few extra kilo’s in the long run.