Here is the second part of my adventures in Shanghai.  I know that some of my posts tend to be ridiculously long which is why I have split this one into two.  Plus that way it counts as two posts and not one 😉

Anyway after a couple of days filled with highs, lows, celebrations and a few too many cakes and glasses of wine at the circuit hospitality my family and I headed back into the city for our last couple of nights in Shanghai.  We went for lunch at another highly recommended and famous Taiwanese dumpling restaurant called Din Tai Fung.

We had the usual fare of dumplings, steamed pork buns and glutinous rice rolls which cost us a little more than expected.  Din Tai Fung was good and all but it was nothing spectacular and certainly no better than the street food that we had been paying no more than 5 YUAN for.  I’m all for eating out (you know me) but I just love the experience that comes with street food.  Yeah sure some people think it’s questionable and you are potentially dicing with a bad case of the runs but as my saying goes, if it’s busy….  Give me street side dumplings any day!

That night a acquaintance of my mum and dad invited my family along to dinner compliments of the 6th richest man in China.  Hoping we weren’t going to have to fork out any money for what we knew was going to be a decadent affair we found ourselves in a private room in an exy restaurant called Xi’s Garden in the French Concession. 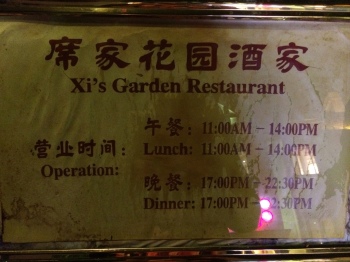 After introductions were made the 11 of us sat down and the Chinese man whose name was Leon (I think?) took the liberty of ordering for us, as the Chinese tend to do.  The waitstaff bought in Great Wall red wine (nothing to do with the shitty car brand) and Chinese beer and the procession of dishes to our large table began.  And I mean this was a procession, they just kept coming.  The dishes that I can reSmember included duck, deep fried crispy fish, abalone, xiao long bao, soup, water spinach, lotus root, bean curd, egg rolls, fried rice, some chicken and peanut thing, braised pork, steamed whole fish, beef tendons (look absolutely nothing like beef tendons – or I wouldn’t have eaten it), sweet and sour pork (or maybe it was chicken), eel and an array of other dishes.

It was an absolute feast and definitely one of the more lavish dinners I have had the opportunity to attend.  One of the dishes on the table we were informed was bullfrog.  I had seen them in the markets, hopping around in a large bucket waiting to be selected and I was disgusted that people would actually eat them.  Much to my dismay our host, Leon, insisted that my brother and I try the bullfrog.  I have to say, although I didn’t want to eat it, I did, I can say I did, it was ok but I won’t be eating it again.  It was the idea of eating bullfrog that got me.  It actually tasted alright – the texture of fish but the taste of chicken.  Ew. 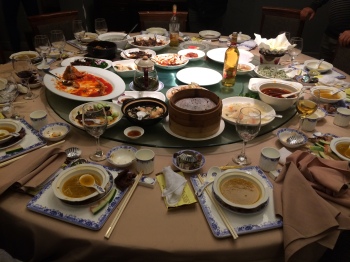 Our decadent and unbelievable expensive dinner (thank god we didn’t get the bill) was concluded with a small dessert, for that I was grateful since I was as my dad would say ‘up to pussy’s bow’, with a glutinous rice ball filled with cream and mango.  It was A.M.A.Z.I.N.G.  The outside was super soft and the inside was creamy and sweet.  It was, as my brother said, like ‘eating a cloud’.  I was sad that we only got one each but in the grand scheme of things that was all I needed. 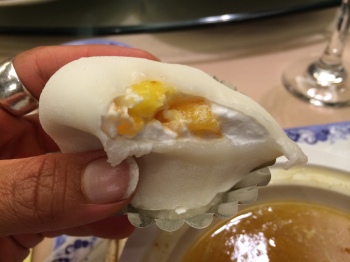 After dinner, with bellies full of food my family and I were more than ready to head back to the hotel and sleep off the mountain of food we had just eaten but our host was ready to kick on at an exclusive bar in the French Concession called People.  In order to gain access you had to stick your hand into one of 9 holes to find a level that opened a secret door.

Good way to keep drunk people out of your club

Ah yeah, it was just a little bit more up market than the usual dingy Cairns club where your shoes stick to the floor.  We stayed the obligatory hour with me having a Gin and Cucumber cocktail (surprisingly good and refreshing, although I was the only one that thought so) and we headed back to our hotel for our final day in Shanghai.

My Gin and Cucumber Cocktail

The next day we were on a mission to do some last minute ‘knock off’ shopping on Nanjiang Rd and in the French Concession.  Unfortunately China is heading into winter so the clothing wasn’t exactly desirable but the fashion over there is certainly trendy to say the least.  The real reason that I wanted to finish up in the French Concession was because there was a famous restaurant in that area that according to my trusty Lonely Planet guide was a massive hit with the locals and like stepping back in time tinto a 1950’s Hong Kong diner.  I had to go there.  Again it wasn’t hard to find because of the large line that had formed outside and after my dad stepping in dog shit and making a huge fuss trying to wipe it off his shoe on the sidewalk (typical dad) I managed to secure us a number in the queue in order to secure us a table inside Cha’s Restaurant. 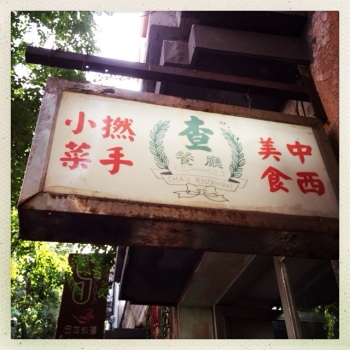 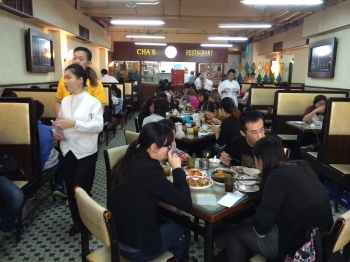 We only waited about 20 minutes for our table for four which was pretty good considering the line – but like I said earlier you never wait long for food in Shanghai.  I had a milk tea since it seemed like everyone was having them so I figured they had to be good. 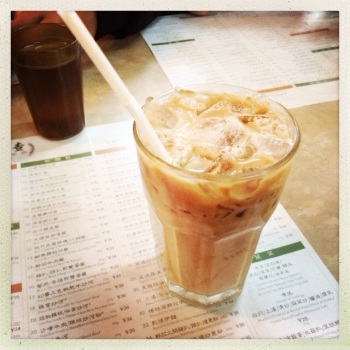 We ordered some more Braised Pork, Bean Curd, Water Spinach, Lemon Chicken and an eggplant dish.  It was the first time I had found Lemon Chicken on our 7 day stay in Shanghai and I was stoked because it’s one of my favourite dishes.  Turns out, apart from the Lemon Chicken at Kin Wah on Florence Street (best Chinese in Cairns), this Lemon Chicken from Cha’s Restaurant was right up there!  My milk tea was pretty good too. 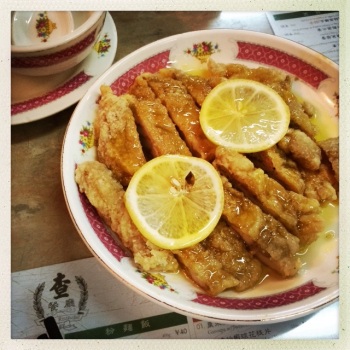 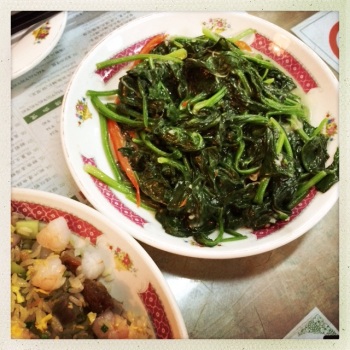 Water Spinach with Garlic and Tofu

Unfortunately we finished our dishes and headed to the hotel to pick up our luggage but not before I made a mad dash across to Fungan Rd (the food street) to get my last fix of Roasted Chestnuts.  We took the Maglev (the world’s fastest magnetic train) from Pudong to the International Airport and althought it was about AU$10 more than the normal train we got to the airport in about 8 minutes and travelled at a top speed of 430km.  It was pretty awesome and even though my dad whinged and complained about the price he thought it was pretty awesome too.

Well that’s about it for my trip to Shanghai.  I had an absolutely amazing time and after travelling to quite a few places around the world I can’t recommend China enough.  It’s certainly different and without a doubt the Chinese can be very rude but the way I try to look at it is – that’s just how they are.  The spitting and smoking can get a bit much but again, that’s just how they are.  When you do find the kind ones then it makes it that little bit more special.  Shanghai is like an Asian New York – there is plenty going on and plenty to see.  I am really hoping that China Eastern Airlines recommences their direct flights from Cairns to Shanghai because I am already planning a trip back but this time with the more cautious and less adventurous MS in tow.  He has never been overeas though so it remains to be seen just how he reacts to the street food aspect.  Shanghai is the ultimate foodie destination and you can go cheap or you can go high end, it’s all there.  With nearly everyone second shop being a restaurant, cafe or a Starbucks the Shanghainese love food nearly as much as I do, and I can assure you that’s a hell of a lot. 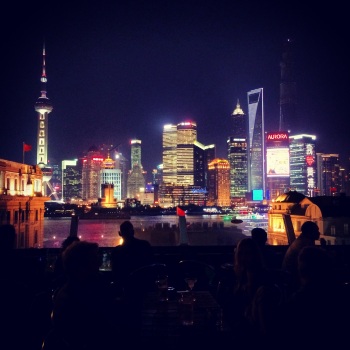 Posted on November 27, 2013, in Cairns. Bookmark the permalink. Leave a comment.