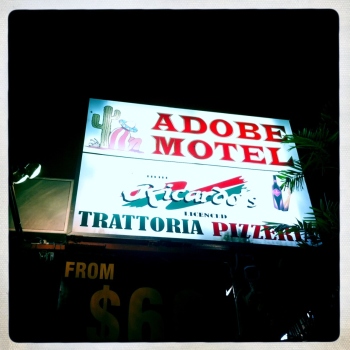 After our massive binge in Sydney the last thing that MS and I wanted to do was come home and continue on our downward spiral… NOT!  We started out with the best of intentions but at some point in time on our flight home we decided that we would re-start our healthy eating the next day and not that afternoon as originally planned.  (Disclaimer:  I’m not going to be one of those people that harp on about healthy eating and me being on a diet and other boring sh*t like that because when it comes down to it I normally eat what I want, within reason, but like I said I have a particular goal in mind – no it’s not just to lose weight – and all this is part of the story, ok?)

Then the conversation of just where we were going to eat that night began.  MS, true to form, wanted to go to Bel Paese since he had quite a penchant for large creamy bowls of pasta and cheesy garlic bread.  I was a little reluctant to go to Bel Paese, firstly because our last dining experience there wasn’t anything to write home about and because, well, I have already written about that place.  If I was only allowed one cheat meal a week then in theory it needed to be somewhere that we hadn’t already been so I could post about it on foodvixen later.  So, we decided on the pasta theme but couldn’t think of where to go.  I suggested Fasta Pasta, La Fettuccina and Villa Romana but neither of us were really excited by any of those suggestions.  Last time I went to Villa Romana, which was years ago, my dining buddy found a giant moth in her salad and last time MS and I went to Fasta Pasta we ordered two completely different dishes to find they both tasted exactly the same.  As for La Fettuccina, well, I am saving that one for a special occasion.  Then I remembered a little place that we had walked past on Sheridan Street about six months ago.  Hell, we drive past it nearly every day.  So off to Little Ricardo’s we went.

Little Ricardo’s is located on the strip of cheap motels directly across the road from Cairns High.  Everyone has driven past and seen it there, as have I.  It’s just inside, near the pool area of the Adobe Motel.  I don’t know how long it’s been there but at the very least it’s been there since 2008 because an outdated sign out the front claims that Little Ricardo’s was voted Best Pizza in 2008 by Cairns locals.  We went inside and found ourselves in a quaint little restaurant with dim lighting, a stocked wooden bar over to the left and the air conditioner turned up full bull.  We were greeted by a friendly waitress whose name was Julie Ann and since there was no one else in the restaurant at the time she let us choose our table.  With a bit of a shiver from the aircon MS and I chose one-off to the side out of the direct breeze.  Julie Ann asked if we would like her to turn the fan above us off to make us a little more comfortable to which we happily obliged.  She then brought us over a couple of menu’s and a jug of water with some glasses and left us for a few minutes returning to take our drinks order.  I was happy to stick to water but MS asked if he could have a glass of Coke to be brought out with dinner.  The menu had the usual Italian fare and although the pizza’s were voted the ‘Best in Town’ in 2008 we were both there for the pasta.

There was no dilly dallying in deciding what we wanted at Little Ricardo’s, even MS made up his mind quickly for once.  We chose the Garlic Bread (AU$5.90) as our entrée but asked if we could have cheese on it as well.  Julie Ann happily obliged and assured us it wouldn’t be a problem.  Then for his main meal MS chose a large Boscaola with Tasty Cheese, Mushroom and Parmesan for AU$23.90 with Fettucine.  He also added bacon, chicken and a hint of chilli to his dish (we’re not difficult customers I swear!), which Julie Ann said was also not a problem at all.  After tossing up between the Amatriciana and the Marinara pasta I ended up going with the Marinara which was described on the menu as Fresh Local Seafood Combination with the choice of Cream or Tomato Base for AU$25.90.  The Fresh Local Seafood Combination sold me pretty much straight away.  I also chose the fettuccine and opted for the tomato base as opposed to the heavy cream base.  Ok, ok I have a confession to make… I ordered a large serve too.  Don’t judge me. 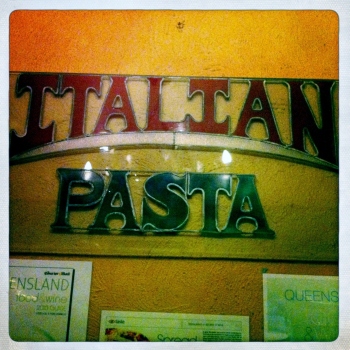 While we were waiting for our meals to arrive a couple more tables filled up and then a couple more until there was about 5 more occupied tables in the restaurant.  I was pretty impressed considering that it was a Monday night.  Many restaurants in the city would struggle to get that amount of people in on a Monday.  Julie Ann brought over a big bowl of ‘stinky cheese’ as MS calls it whereas I just call it powdered Parmesan Cheese and some little plates and cutlery followed closely by our entrée of Cheesy Garlic Bread.  We got three pieces each and after fighting over who got the three biggest pieces we dug in.  The Garlic Bread was simple, yet tasty and with just the right amount of cheese melted over the top.  It was really yummy and not as yellow as it looks in the picture below.  We even managed to save a couple of pieces to mop up our pasta sauce with.  I have a massive weakness for Garlic Bread and if I were religious I would ask god “Why, oh why did you invent Garlic Bread?”  Just when I think I am going good and eating well.  BAM!  Someone brings out a loaf of Garlic Bread (or I order it) aaaaaaand I’m screwed. 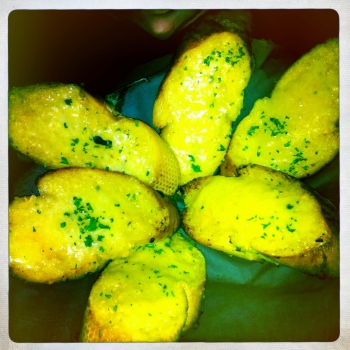 Right before our meals arrived and without prompting Julie Ann brought MS over a glass of coke and placed it on the table in front of us.  Again I was impressed. I hadn’t had service this pleasing in Cairns for a long time (with the exception of Waterbar and Grill).  The owner of the restaurant Richard brought us out our main meals which were placed steaming hot in front of us.  He saw me whip my iPhone out to take a couple of pictures of the food and politely offered to take a picture of the two of us.  Errr, yeah sure!  Richard was lovely and friendly and we had a bit of a laugh with him about him covering half of the photo with his thumb.  Never mind, nothing a little photo cropping won’t fix and I have sh*t tins of photos of MS and I at dinner anyway.  The large serve really was a large serve.  Each of our bowls were overflowing with large mounds of pasta.  There was plenty of extra bacon and chicken mixed through MS’ Boscaola and he was beside himself as he twirled his first mouthful of fettuccine around his fork.  After a few mouthfuls the only sentence that escaped his mouth was ‘Oh god this is good’ as he twirled more fettuccine around his fork.  It was that good that he ate till he couldn’t fit another mouthful in, leaving only a couple of strands of pasta in the bottom of his bowl and announced that Little Ricardo’s was his new favourite restaurant. 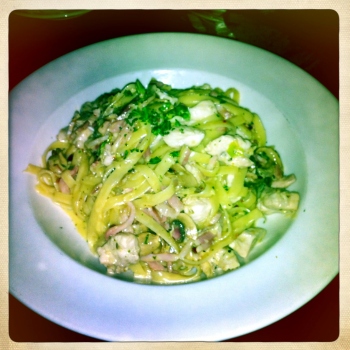 Boscaola with Tasty Cheese, Mushroom, Parmesan and extra Bacon, Chicken and a hint of Chilli (AU$23.90)

Looking down at my pasta I could see two big fat juicy scallops with the bright orange roe on them (as it should be!) and my mouth began to salivate.  There was also prawns, fish and super tender pieces of squid mixed in as well.  My Marinara was absolutely to die for and I was glad that I had chosen that over the Amatriciana (even though I hadn’t had the Amatriciana yet).  The pasta was cooked ‘al dente’ and the bountiful bits of seafood throughout my dish were all full of flavour and cooked to perfection.  My mouth is seriously drooling thinking about this dish.  There was just the right amount of sauce, not too little, not too much and with a bit of ‘stinky cheese’ sprinkled over the top I too ate nearly the entire bowl and mopped up the remaining sauce with my ‘smaller’ pieces of Garlic Bread.  The only thing that I think it needed was a little hint of chilli but that was my own fault for not asking for it.  Where’s my bottle of Tabasco sauce when I need it? 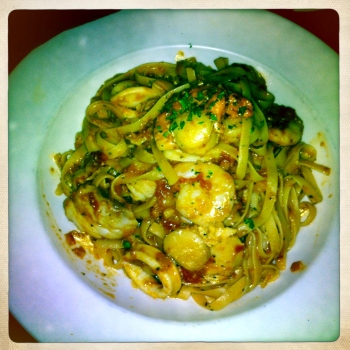 Marinara with Fresh Local Seafood Combination and the choice of a Cream or Tomato base (I chose Tomato obviously) for AU$25.90

MS and I joked that we had just traveled to a foodie lovers paradise (AKA Sydney) and then flown back to Cairns and had the best meal and service of the entire weekend.  Even though the restaurant picked up with more arrivals after our own Julie Ann didn’t miss a beat and delivered fantastic, efficient and friendly service from the moment we arrived to the moment we left.  The atmosphere and dining setting isn’t fantastic  and to be honest it’s pretty dated but you know what?  I think it works.  On doing a little bit of online research it appears that Little Ricardo’s is ranked 5th in Cairns out of over 200 restaurants on Trip Advisor, which doesn’t mean a whole lot since I am still trying to figure out why an ice cream shop is number one, but it definitely pays homage to the wonderful things Richard and his team are doing down there at the Adobe Motel.  (No offence to the ice cream shop.)  The only problem with going to Little Ricardo’s for the first time is that now MS and I want to go there all the time and have already been back again (this time for more Cheesy Garlic Bread and to try the Amatriciana).  Little Ricardo’s where have you been all my life? 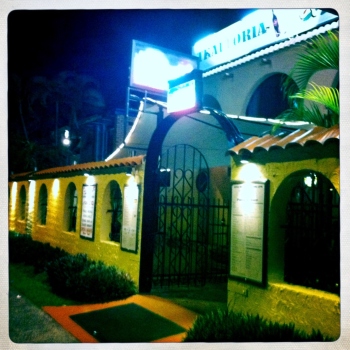