It’s 1.25am and I am at work struggling to put pen to paper so to speak but I know that if I don’t get this post done then it could be a good two and a half weeks before I get one up.  I figure now is as good a time as any to write about my dining experience at one of Cairns’ favourite restaurants, Waterbar and Grill.  A couple of friends and I were pondering over where to go with a group of us for an early dinner on a Sunday evening so I decided on Waterbar and Grill since I had been pining to try this particular dish that my sister had recommended, I knew the food was good and they were happy to split the bill there.  It seemed like the perfect suggestion.  Everyone else happy with it (not that they really had a choice) and a group of nine of us met there at 6pm last Sunday.

I had already rung up and made a reservation a couple of days before knowing full well how popular and busy Waterbar is on any given day due its waterfront location and great food.  I have dined at Waterbar and Grill countless times since they opened around six years ago and have never had a bad meal.  In fact if anyone ever asks me where to get a good steak in Cairns I always recommend Waterbar and Grill before any other restaurant.  It had, however, been over a year since I last dined there and I was hoping that nothing had changed, in fact I pleasantly surprised because things seemed to have only gotten better since my last time.

It was a bit of a catch up dinner for my friends and I since now ALL of us are in relationships and have our own shit going on we don’t get to catch up with each other as much as we would like (translates to: now we have to be responsible and not go out on the town every weekend till all hours of the morning), plus I work away so that makes things just that little more difficult.  Thankfully we were seated inside because it was still stinking hot outside and the air conditioning was a welcoming cool change from having drops of sweat running down your spine.  Two of our friends were already seated with drinks and as we sat down the waiter asked us what we would like to drink.  True to form MS and I went for the glass of coke and glass of Sauvignon Blanc respectively (Angel Cove I think was on the cards for me tonight).  Within minutes the rest of our crew had arrived and promptly ordered drinks from the waiter.  About five minutes later our drinks ensued and I was elated at just how quickly the whole event had taken place (drink service that is).

While we chatted and caught up on new ventures, diets, birthday weekends away at Mt Quincan and harrowing tales of Steve Irwin’s final moments (still to this day makes me want to cry like a baby) we had a look over our menu’s and told the waiter what we wanted.  Before I start I will say that I’m not going to write a book about everyone’s meal at the table, as there was nine of us in total and to be honest I really just couldn’t be arsed especially since most people at the table ordered a variation of the same dish, aka a steak.  A steak is a steak in my book, as long as it’s a good steak and in the case that it’s not then I’ll write about it.  I was really only concerned with the entrees and what MS and I were having for this particular post as I don’t want to rattle on too much.  MS ordered an entrée of Salt and Pepper Squid with Coriander and Lemon for AU$16 while after a big day of eating and the day before I was to start my new ‘mass gain’ eating plan (the implications that will have on both me and my blog will be explained in a later post but seriously FML).  I opted for no entrée figuring that MS would share some of his with me.  Unbeknownst to the rest of us at the table my beautiful friend MG, being the lovely and overly generous hostess with the mostest that she is (our own personal one anyway), ordered a couple of dishes as entrees for the entire table to share.  I was delighted but also felt bad at the same time.  MG chose a Selection of Dips – Walnut and Chilli Pesto, Roast Beetroot and Hummus with Warm Crisp Bread for AU$15 and the Boerwors – Traditional South African Sausage served with Garlic Mash for AU$26.

No longer that fifteen minutes passed before the entrees arrived at our table.  The Selection of Dips were yummy but it’s pretty hard to balls up a dip platter unless of course you try to make your own organic dairy free pesto for a Trivia Night like I did, because lets face it, pesto is no good without cheese in it.  MS’ Salt and Pepper Squid was probably some of the best Salt and Pepper Squid that I have tasted while dining out for a very long time (Mum and Dad’s squid still reigns supreme though).  It was tender and fresh with just a light dusting of flour and was a very reasonable sized serve (much bigger than I was expecting).  I managed to snavel a couple of pieces off MS’ plate but to be honest  I was way too captivated by the large sausage in front of me to pay attention to the squid. 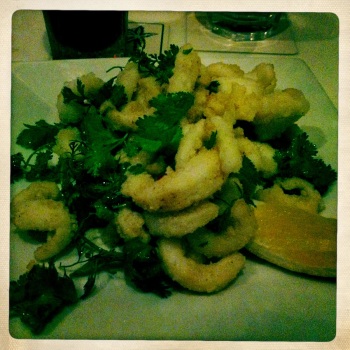 Salt and Pepper Squid with Coriander and Lemon for AU$16

Luckily for me the humongous Boerwors was placed directly in front of me and with much encouragement from MG to eat it I simply couldn’t help myself along with the rest of the table.  MG also ordered a side of Red Wine and Chilli Sauce as a dipping sauce to go with the Boerwors.  I have to say that this dish was absolutely delicious and I was deeply saddened by the fact that I had to share this dish with the rest of the table and also the fact that I hadn’t ordered it for my main course.  Fail.  The Red Wine and Chilli Sauce is so good that I could literally drink it and a mouthful of that ‘oh so smooth’ Garlic Mash with this sauce drizzled over the top is heavenly.  Admittedly I’m not normally a fan of mash (I just don’t see what all the fuss is about) but I thought I was off mash for life after tasting my crew mates ‘Mash Surprise’ into which he literally puts anything and everything.  Last time he made it not only was there potato in it but ginger, garlic, chilli, coriander, parsley, pepper, spring onions, red onion and at least another three items that fail to spring to mind at 2am on this fine morning.  Now you know why myself and the rest of my crew call it ‘Mash Surprise’.  Unfortunately I’m yet to convince my crew mate that less is more in the mash department.  But back to Waterbar’s Garlic Mash… I don’t know what they do to it, it’s smooth, it’s creamy, it’s garlicky and it must be really bad for you but it’s so damn good that who really cares?  I could shower in that shit!  The chunky Boerwors curled up in a big meaty pile on the plate also didn’t disappoint in all it’s mouthwatering fleshy goodness.  The nine of us (minus one who is a vegetarian) absolutely annihilated the entire dish. 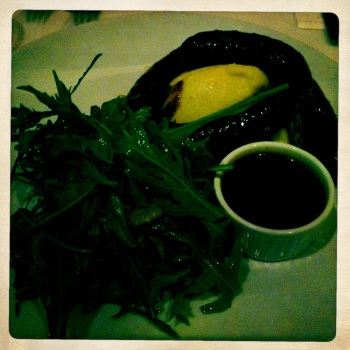 Next up our main meals arrived and on the recommendation of my sister I had committed the ultimate sin and ordered a salad at a steak restaurant.  She insisted that every time she dined at Waterbar she ordered the Grilled Lamb Salad with Rocket, Cous Cous, Haloumi Cheese, Lavosh and Goat’s Cheese Dressing and raved about how good it was.  I tend to think that my sister knows what she is talking about when it comes to good food (not as much as me of course but hey) so I went with it and boy did I regret it.  It’s crap watching everyone around you chow down on beautiful big, juicy steaks with oozy Red Wine and Chilli Sauce and giant skewers of Espatada when you are munching on slivers of lamb and squeaky bits of haloumi.  I’m not going to blame Waterbar for making a shitty salad, although it was, but myself for ordering a salad at a steak restaurant.  Both the lamb and the haloumi were cold and there just didn’t seem to be a whole lot to the dish other than rocket.  I am a big fan of the Rocket Salad at Waterbar but that’s when I have it as a side salad with a big juicy steak, not an entire bowl of it.  Thanks for the bum steer TW.  Sad panda.  I’m going to liken ordering salad at a steak restaurant to eating Western food in Thailand.  You just don’t do it (sorry to all those vegetarians out there). 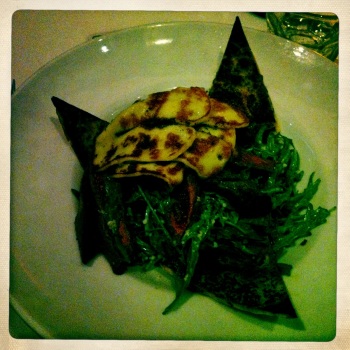 MS on the other hand was happily munching away on his 250g Prime Rib Eye with Garlic Mash, Red Wine and Chilli Sauce AND Blue Cheese and Caper Butter for AU$34.  Apparently the mixture of the Red Wine and Chilli Sauce and Blue Cheese and Caper Butter with lashings of Garlic Mash is a taste sensation according to MS and after tasting a forkful I think I am going to have to agree, but lets face it, everything tastes better with Blue Cheese.  To my left everyone’s eyes nearly popped out of their heads when they caught a glimpse of AA 400g Prime Rib Eye on the Bone for AU$42.  All steaks at the table were cooked to everyone’s liking, as you would expect at a steak restaurant, but as we all know can not always be expected.  MS thoroughly enjoyed his meal, as did everyone else at the table apart from yours truly.

Apart from the delicious food (forget about the salad ok, just forget it) what impressed me the most while dining at Waterbar and Grill was the outstanding service.  It was, as the website says, exceptional and in my opinion probably some of the best service that I have received when dining out in Cairns in a very, very long time.  Our glasses of water were topped up regularly, our water jugs replaced before they were empty an without asking, our drink orders were filled numerous times without us having to summon any wait staff and when our meals were brought out the each member of the wait staff knew exactly who ordered what and exactly whom to put it in front of.  It was certainly a breath of fresh air and those that dine out regularly in Cairns know how rare it is to find such superior service.  However, this particular Sunday wasn’t a one-off occasion, Waterbar and Grill continues to deliver great food and service day in, day out which is probably why they have been named FNQ’s Best Steak Restaurant numerous times over the last few years (except for last year for some reason).  If you are looking for a succulent steak, great atmosphere and service that is second to none then get yourself down to Waterbar and Grill at The Pier if you haven’t already although I suspect most of you have.  Just don’t make the same mistake that I did and order salad.  Also, watch out for those darn ceiling fans.