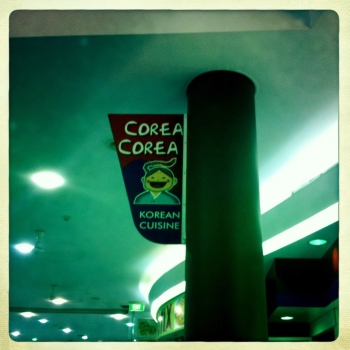 Last Sunday I took my little bro (AW) out for dinner for a bite to eat and a bit of sisterly advice since the whole finishing school/starting real life thing seemed to be getting to him a little bit.  After a bit of thought I decided on Corea Corea since it was in town and convenient to where we already were in the city.  We headed up the escalators at Orchid Plaza and I was taken aback by just how many people were upstairs.  I figured that they must be all spread out along the top floor at the different eateries that are up there but on closer inspection Corea Corea was the only one open.  There was about 100 people or more there for Corea Corea on a Sunday night.  I couldn’t believe it.  And what’s more there was even a line of about 10 to 15 people deep.  Not to be put off, we weren’t in a hurry so we headed to the back of the queue which seemed to be moving quickly.

The five minutes or so that we waited in the queue gave us ample time to decide on what we wanted to order from the large menu behind the counter.  When we got to the front I asked AW to go and find a table to which he managed to find one up on the decking in the actual restaurant part of Corea Corea.  A lot of other people were seated out in the Food Court waiting for or eating their meals.  I waited at the counter a couple of minutes while the wait staff sorted themselves out watching them all frantically running around like chooks with their heads cut off as my nana would have said.  And when I say running I literally mean ‘running’.  One waiter in particular was bringing dishes out to various tables and virtually sprinting back to the kitchen to keep up with the demand.  By this stage a man had come to the counter to serve me, I asked him if they were normally this busy to which he replied “most of the time”.  Again I was surprised because I do go to Orchid Plaza quite a bit but have never seen it this busy, although I tend to go during the day.

I ordered a Spicy Chicken Pot (AU$13.95) for AW and while I was tempted to order the Charcoal Grilled Beef Ribs (AU$21.95) I had a bit of a craving for noodles so I went with the Spicy Cold Noodle (AU$13.95) instead.  The prices at Corea Corea are hardly going to break the bank with only two items on the menu over AU$15.95.  I took a seat at our table with the number I had been allocated and we waited for our meals to arrive.  In the meantime I gave AW some advice on home, Mum, Dad, our sister, money, work, girls (one in particular), mother in-laws (one in particular), exercise and the future.  That took about 5 minutes and then our meals arrived.  Nah jokes, it took a little longer than that.  Our meals arrived one after the other, firstly my Spicy Cold Noodle with a little container of Kimchi, a bowl of Miso Soup and a smaller container of what I am assuming was lemon juice.  It looked like lemon juice and it tasted like lemon juice so let’s just call it lemon juice.  Then AW’s Spicy Chicken Pot came out sizzling hot in its own little black pot.  I seriously reckon that the Chef’s and the wait staff must burn themselves so damn much working with those things.  I know I would seeing as how clumsy I am.

I dug into my Spicy Cold Noodle pretty much straight away although the Spicy Chicken Pot was so damn hot that AW couldn’t start eating it for a good 20 minutes when I was pretty much finished mine.  The Cold Noodles (there was even ice cubes in there – maybe they should call it Icy Cold Noodles) were exactly what I needed on such a hot night and I ordered them not only because they taste awesome but also because I didn’t feel like sweating my ring out with something as searingly hot as a Korean Pot.  The noodles are really long and a little hard to bite through making it difficult to swallow mouthfuls.  I tend to end up with half of them down my throat and the other half in my mouth trying not to choke.  Gee these Spicy Cold Noodles sound delicious don’t they.  I have eaten them at Corea Corea before and they gave me a pair of kitchen scissors with my utensils assumedly to cut the noodles into more bite size friendly pieces.  Maybe they had run out scissors this time around but I managed just fine.  Don’t let that put you off especially if you love chilli and noodles like I do because these noodles are damn good!  I love the julienned bits of cucumber over the top with the chilli.  There also half a hard-boiled egg, a slice of beef and a bit diced chilli on top for decoration.  I poured the ‘lemon juice’ over the top since that is what I am assuming you are supposed to do with it.  Again my Spicy Noodle Bowl is a really yummy dish and I enjoyed it immensely.

It is pretty hard to have a big pot of yummy food sitting in front of you that you can’t eat because it’s too hot and after about 20 minute’s of burning himself with small bits of rice and chicken AW’s Spicy Chicken Pot had finally cooled down enough to actually eat it properly.  On the top there was a generous amount of shredded cabbage and underneath a yummy mix of rice, chicken and veggies.  The only problem is that because the whole mixture is sitting in the pot sizzling for such a long time it gets stuck to the bottom of the pot and gets a bit crunchy.  I personally think that is the best part of the whole dish and AW seemed to agree while MS thought it was gross when I dined there with him once but who listens to him anyway (just kidding my love).  AW practically inhaled his Spicy Chicken Pot when he realised it was cool enough to eat and seems he has developed a few family habits, not even leaving a grain of rice behind (I do the same and so does our dad).  You could call us gutses but I just reckon we like our food.

Corea Corea is certainly a bit of a favourite haunt for locals and tourists in Cairns.  Again the place is ridiculously busy for such a little place in the middle of a seemingly barren food court that most tourists probably only stumble across.  I’m not sure that I agree with the statement on the Orchid Plaza website (apparently Orchid Plaza has ‘World Renowned Multi Cultural Eateries’) but what used to be a sleepy two storey shopping centre that was mainly just used as a way of getting from Abbott Street to Lake Street or vice versa has re-awakened and it’s a great place to go if you are looking for a Asian meal for lunch or dinner.  My only problem with my dinner that night is that I had a bit of an upset stomach the next day.  I could blame the chilli but since I’m half Sri Lankan chilli isn’t really a problem for me.  AW didn’t seem to have a problem but that is probably because his meal was cooked in a hot-pot in ridiculously high temperatures (sort of on par with the temperatures Cairns has been experiencing lately).  I’m not saying that it was the Spicy Cold Noodles but I am not saying that it wasn’t.  I do sometimes question the cleanliness of Orchid Plaza as a whole with its open food court and birds roosting above so having sizzling hot meals that you can’t eat for the first 20 minutes can only be a good thing.  Still like I said we both enjoyed our meals along with half of Cairns, the food tasty and cheap, and even though I may sometimes question the hygiene of such a place, like The Lillipad Cafe, it hasn’t stopped me going back again and again.