The Best Som Tum in Cairns

I have been doing the rounds in Cairns trying to find exactly where the best Som Tum is.  For those who don’t know what Som Tum is not only are you missing out on one of the best Thai dishes around but a healthy one too (minus the palm sugar).  Som Tum is basically shredded upripe Pawpaw (or Papaya) with Chilli, Palm Sugar, Garlic, Lime, Fish Sauce, Beans, Shrimp and Tomatoes.  The Thai people do tend to make it really damn hot, as my mum and I found out in Bangkok a few years ago ordering a Som Tum that neither of us could finish and no amount of Mango Smoothie could soothe.  We are not amateur chilli eaters either.  Too many times I have been disappointed when I have ordered this delicious Thai Salad but finally I have found just where to get the best one in Cairns.  But firstly I must tell you where not to go.

Thai Coins – This little Thai takeaway on Mulgrave Road is where my Cairns Som Tum experience first began a few years ago.  Every Friday night (or any night I felt like it for that matter) I would go and order a Som Tum from the lovely owner.  My orders became so frequent that he even began to recognise my voice on the phone when I rang up to place the order and knew what I wanted before I even said it.  Unfortunately, over time I noticed that my Som Tum started to get smaller and smaller until after a couple of months my Som Tum got so damn small that I decided that I wasn’t going back for another one and I would continue on in my search for the ultimate Som Tum.

Khin Khao Thai Restaurant – A couple of months ago SH and I were both looking to satisfy our craving for Som Tum so we decided that we would head to Khin Khao on Aplin Street for dinner.  The serving size was good but the sauce was so damn sweet I wondered if I was actually eating dessert.  There really must be a nice balance between sweet, sour and spicy for the dish to even work and after trying the Som Tum at Khin Khao they just don’t have that balance.  That said the three whole prawns that were included in the dish were imported and the male owner of the restaurant was so damn rude that neither of us will ever return.  Next!

Larnxarng Lao and Thai Cafe Restaurant – About a month ago while MS was away for work I travelled from my humble abode near the city in search of more Som Tum.  Unfortunately unlike Darwin it is actually hard to find and not many Thai restaurants or takeaways have it on their menu.  I had heard good things about a little Thai place on Spence St who also run a stall at Rusty’s Markets.  I ordered my $10 take away Som Tum and took it home to eat on the couch while watching 60 Minutes (better than X Factor surely).  I opened up the container to find not only was my Som Tum significantly smaller that I would have liked but it was also full of cabbage.  Additional to that there was a whole lime thrown cut in half inside to make the dish look a little bigger than it actually was.  Not only this but the Som Tum was very disappointing.  It was pretty much just fish sauce drizzled over some cabbage and shredded pawpaw.  Sounds appertizing huh?  It has to be one of the worst Som Tum’s I have ever had.  Since when does Som Tum have cabbage in it?  Seriously?!  I really wish I had taken a photo of this dish but for some reason I felt no need until I decided to do this post a few weeks later…

J & L Takeaway and Minimart – After my disappointing experience at the Thai Takeaway on Spence St I decided to move a little closer to home and tried a takeaway that I had driven past a few times on Minnie St.  I called up to order a takeaway Som Tum one night during the week.  The lady answered in a thick Thai accent and I ordered my Som Tum with sticky rice on the side.  Again MS was away for work and what MS (my food keeper) didn’t know about my carb consumption wouldn’t hurt him.  I ordered and the lady promptly hung up without telling me how long or taking my name.  In fact she hung up so quickly that I wasn’t even sure if she had hung up and there was that uncomfortable silence on my behalf… “Hello?”  But she was gone.  No doubt busily shredding oodles of green pawpaw as a result of my phone call.  So I gave her the obligatory 15 minutes before I headed over to pick up my Som Tum.  I returned home not long after and removed the lid to find large amounts of decorative lettuce in the take away container, no doubt another ‘fluffer’ to take up the space where the Som Tum should have been.  Another disappointing and small Som Tum.  It was tasty but what the hell am I actually paying for here?

Thai Kitchen (food van at Rusty’s Markets) – I went here a couple of weeks ago and ordered the Som Tum to ‘eat in’ which really just means to sit at ones of the the rickety old tables amongst the flies in front of the food van.  Don’t get me wrong I love eating out of food vans but when the lady behind the counter took the ‘already prepared’ Som Tum out of a small fridge and plonked it onto a plate with a sprinkling of peanuts I knew I was in for a treat.  Nevertheless I sat down and ate my Som Tum.  It was exactly as I had expected.  Soggy and nasty.  The tomatoes in it were almost certainly on the turn and the fact that I had no idea just how fresh it was was extremely disconcerting.  In fact I do remember messaging MS not long after saying that I may in fact sh*t myself after eating that lunch.  Lucky for me there were no unexpected (or expected) trips to the toilet but I won’t be back for another round.

Chilli Thai Takeaway – This week MS has recently discovered the wonders of Phad Thai.  I know, I know.  The boy is sheltered and he is yet to go overseas on the obligatory Thailand pilgrimage that myself and many other Aussies have had the opportunity of doing.  Anyway so now that he loves Phad Thai I figure that I can use this to my advantage.  He gets the Phad Thai while I get the Som Tum.  Works well for me, plus I always get to taste his Phad Thai.  Yesterday we headed into the city and found a place in good old Orchid Plaza. 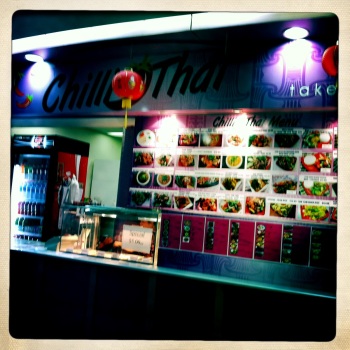 I ordered the Som Tum from the large picture menu at the front of the shop.  Strange though because the picture of the Som Tum, although nice, had Cashew Nuts on top of it and everyone knows that Som Tum has Peanuts in it.  When my Som Tum arrived at the table there were no nuts in sight, not even a measly out of place cashew.  The only thing that was in the Som Tum was the shredded pawpaw, some of ‘what I think’ was limes, a little bit of tomato and strangely enough little pieces of crab claw.  From what I could see there was no crab in the dish nor would I expect there to be so f**ks me how the crab got in there.  The Som Tum was ok but nothing I would write home about nor be back for.  Still baffled as to where the crab claw came from.  Additional note: upon a little researching of Som Tum I have found that black crabs can actually be added to Som Tum and some Thai’s do eat them shell and all.  Having said that the minute crab claw was literally as big as my finger nail and if it was supposed to be in there might I suggest they add a little more next time. 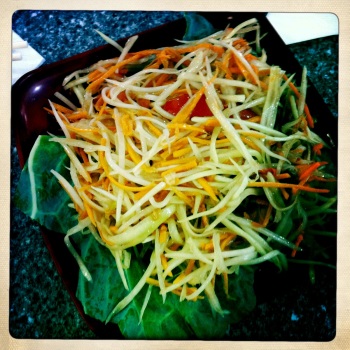 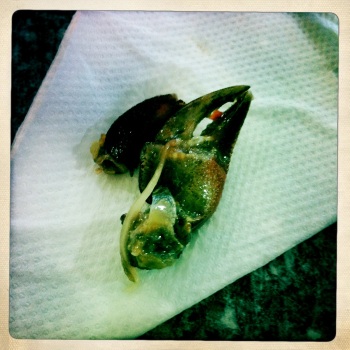 Tiny bits of crab claw hidden in my Som Tum

Lemon Tree – I found this little gem in the Main St Arcade (between Lake and Grafton St) a couple of weeks ago again with my fellow Som Tum enthusiast SH and have been back since with MS and also made another attempt yesterday but alas it was closed.  The Thai family that run it are really lovely and when I asked if I could have a little more Som Tum on my plate in exchange for the rice that I so dearly wanted (but wasn’t going to have) they happily obliged.  The lady asked me how hot I would like it and I said ‘medium please’.  Not too ridiculously hot but I still wanted a bit of fire.  I had a bit of a cold that day with MS and this Som Tum was hot enough that it scared that damn cold right away. 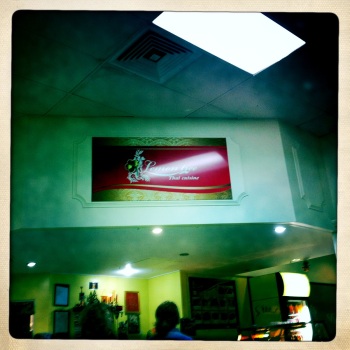 The sauce had just the right balance of sweet vs sour vs spicy, there were those little dried prawns in it, there was beans in it, peanuts and tomato.  Everything that was supposed to be in it was in it and nothing that wasn’t supposed to be.  Kinda nice when you get what you actually pay for.  I am going to go so far as to say that the Som Tum at the Lemon Tree is the Best in Cairns.  I only wish it was open for dinner because I would certainly be more of a Som Tum regular at this awesome little place.