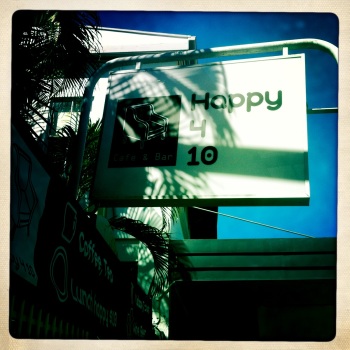 I have finally made it back to the land of the living and that of phone and internet range after what seemed like an eternity.  Lucky for me now I have a few months off work (because I can) so it won’t be happening again for a little while.  Before I went away I went to a few places that I didn’t get a chance to post about before I left.  One such place that I wanted to write about is a new little place that I found tucked away on Sheridan Street that by all accounts appears to have been in operation since May but I didn’t stumble across it until late July.  Half of you are probably like DER that place is old news but it’s not old news to me alright.  Anyway this place that I am talking about is called Happy 4 10 Cafe and Bar.  It’s pretty much located right next to the Shooters Bar (or First Choice for all you alco’s) or across the road from Montezuma’s, hidden away behind a yellow gate and down the pathway.  I don’t actually remember anything being there in the past, to me it was always an abandoned garden full of weeds with a broken neon sign out the front but it seems that someone has taken over and turned it into a delightful little place to dine. 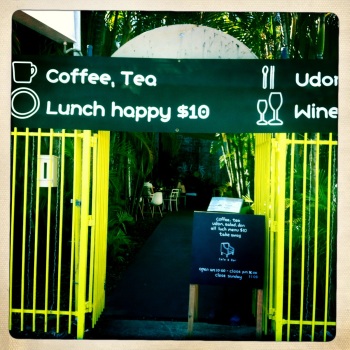 So after making amends with my good friend RS a few posts ago we decided to have lunch and catch up.  She asked me for suggestions and I said there was this new place that I would like to try called Happy 4 10.  She claimed that she had already walked past and looked at the menu, apparently it ‘Didn’t do anything for her’ and she said she didn’t want to go there.  So I said ‘Fine, where would you like to go?’  To which she responded ‘Why don’t we just meet out the front and go for a walk’.  Being the planner that I am this didn’t fly with me so I talked her into going to Happy 4 10 unless she could come up with an alternative.  She couldn’t so off we went to Happy 4 10 and she fought be every step of the way (cue eye twitch).

We arrived and met at the front gate underneath the big Happy 4 10 sign.  There is a sign below on the pathway with the menu on it so you can walk past and have a look.  We walked inside and found a funky, brightly painted, cute as a button and cheap as chips, indoor/outdoor Japanese cafe with a bit of Korean food on the side.  All the main meals at Happy 4 10 are AU$10!  Winning!  Upon arrival the friendly Japanese waitress (Japanese waitresses are always friendly) greeted us and gave us free reign over where to sit since there was no one else there.  We chose a spot with a couple of lounges, one of those weird hanging chairs that just don’t seem stable enough to sit in and a coffee table and she bought over some menus.  While I ummed and ahhed about just which dish I wanted (if I could have I probably would have ordered them all because they all sounded yummy) RS continued on with her ‘this menu just doesn’t do anything for me’ crap so I decided what I wanted and promptly went up to the counter to order.  (Defence:  I wasn’t being a bitch, she was just being difficult, you don’t know RS like I do).  I even offered to pay for her lunch (big spender I am) but that didn’t quite seem to be good enough so I went ahead with my order of Seafood Udon (AU$10) and a Tofu and Seaweed Salad (AU$10) since I just can’t resist Wakame Seaweed (another food item that I could literally shower in).

RS ordered the Pork Katsu Don which she then cancelled and decided that she would just watch me eat.  This confused the hell out of the poor Japanese waitress who ended up stuffing up our order as a result.  Assuming that RS was trying to prove a point by not ordering anything I pretended it didn’t phase me and took a seat at the table outside.  A couple more people arrived for lunch and sat inside followed by four business type people who took up seats at the table next to ours.  We, okay well I, waited about 10 minutes and then the waitress bought out the Pork Katsu Don that RS had ordered, which she then cancelled.  This was in no way the waitresses fault and entirely RS’ considering she couldn’t make up her mind as to what she wanted.

Then not long after that my Seafood Udon and Tofu and Seaweed Salad arrived, again confusing the hell out of the guy serving me.  He couldn’t figure out why I had two meals and RS had a cup of water.  So enough about that crap… Let’s get onto the food.  My Seafood Udon had two large whole prawns floating around in it that by all accounts looked local to me (winning), plus half a mussel, some broccoli and a couple of other bits and bobs in there.  It was steaming hot, almost too hot to eat but it was delicious. 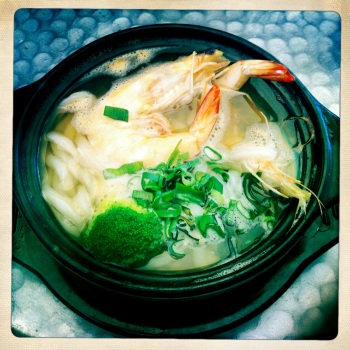 Next up was my Tofu and Seaweed Salad.  I know, I know, I can hear it now.  Tofu?  Yuck!  Well, I happen to love it.  When I am feeling very lazy and MS is at work sometimes I just eat Tofu and Ponzu Sauce.  It tastes so good and despite all the health warnings about eating Soy I don’t eat it near enough to care.  Moving on.  The salad was drizzled with that really yummy brownish Japanese dressing that I have no idea what it’s called.  I have bought it numerous times at the Asian Store on Grafton Street but the label is in Japanese.  Anyone?  Despite the obvious presence of Seaweed (wakame oh yeah) and Tofu, there was also fresh diced avocado, slivers of orange and lettuce.  I really enjoyed it but couldn’t quite finish it all since my menu taste testing had got the better of me and I couldn’t fit any more in but all that for $20?  Still winning. 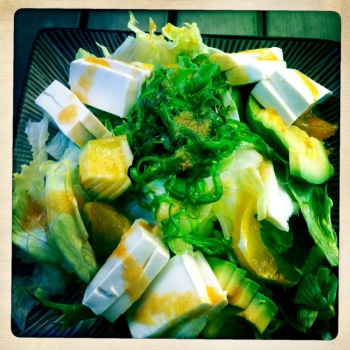 Despite my obvious difficulties with my lunch date Happy 4 10 is a great little place to grab some lunch or dinner.  Again, the fitout is cool and colourful and kinda reminds me of someones backyard but in a good way.  I am looking forward to going back there again to try some of the other stuff on the menu.  The Karage Chicken Salad sounds good.  Wait.  Maybe I’ll get the Prawn Tempura.  No, I want the Teriyaki Chicken Don but then there is the Stir-fried Spicy Pork and the Salmon Salad.  Ah what’s a girl to do?