Right. Where do I start? I guess the beginning would be the best place. Sorry about the lateness of this post. I have been working out of phone range so I have literally been unable to post anything until now. The last restaurant that MS and I went to before I left was Ochre, formerly Red Ochre.  A restaurant that you could probably describe as a Cairns institution since it has been here so damn long. Up until a couple of weeks ago I had never been there before, for two reasons: 1) Because I have never really been a fan of eating my coat of arms (that would be the kangaroo and the emu, and 2) because I always thought it was too expensive. Cue Table 52 card. Anyway after reading all about it on Trip Advisor (great website by the way) and hearing about it from a few other people MS and I decided (ok I decided) to go there for dinner. 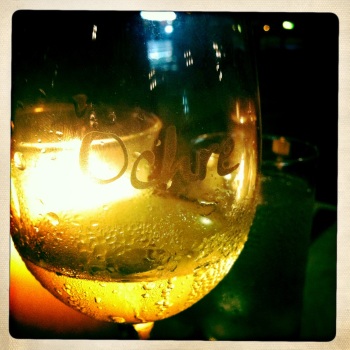 I booked us a table the previous day and lucky I did because Ochre was quite busy for a Tuesday night. I would say about 2/3 full with a large majority of those diners being tourists. (Whoever does the marketing for Ochre is doing an exceptional job particularly in the overseas visitor department). Upon arriving we were shown to our table for two near the window amongst the other diners and the dim lighting where we ordered our drinks. Ignoring the descriptions of wine on the menu I was taken by the name of the wine and asked for a bottle of Stonefish Sauvignon Blanc for the two of us.  Note to self: In future, don’t just choose it because you like the name of it. The waiter poured us a glass of water each and fetched out bottle of wine.

In the mean time we looked over the menu and each decided on an entree and a main. MS went with the Twice Cooked Pork Belly, seared Queensland Scallops with Davidson Plum Jam and Cauliflower Puree (AU$21) for an entree while I, going against my previous statement about eating Australia’s coat of arms, was hell bent on trying what Ochre is best known for… local tucker.  I ordered the Australian Antipasto Tasting Plate which consisted of Kangaroo Terrine with Pickled Kakadu Plum, Crocodile Wonton with Red Pepper Jam, Lemon Aspen Ocean Trout Gravlax, Emu Carpaccio, Goats Cheese and Roast Capsicum Roulade (AU$23).

For a main, MS was torn between the pork and the lamb but ended up opting for the Lamb Short Loin with Preserved Lemon Risotto, Sunrise Lime, Date and Sultana Salsa and Harissa Glaze (AU$34), which if you ask me is very Australian of him.  I chose the Tempura Bay Bugs on Lemongrass, Green Papaya Salad and Sweet Chilli Lemon Myrtle Dipping Sauce (AU$36).  All of the items on the menu sounded absolutely delicious and I have to say I did have a hard time finally choosing that dish over the rest on the menu.  While waiting for our meals to arrive we toasted our evening at Ochre and had a sip of our wine.  Turns out that Stonefish wasn’t a particularly good choice of wine on my behalf as it was much too sweet, and sour. (I’m not a wine reviewer ok so don’t judge me on my wine description). We still drank it but it just wasn’t the best tasting wine I have had to be honest.

We waited about 15-20 minutes for our entrees to arrive which the waitress placed in the middle of the table so we could share. The presentation of the entrees was outstanding, though as I had expected there was a lot of vacant space on the plates and not really that much food present.  We started with the Australian Antipasto Tasting Plate.  MS and I split the Crocodile Wonton in two and each had a bite. It was nice but nothing fantastic.  The flavours of the Red Pepper Jam overtook the flavour of the crocodile so you couldn’t really taste anything other than Jam.  Next up the Kangaroo Terrine which I quite enjoyed.  MS didn’t like it at all and let me eat his share.  The Ocean Trout Gravlax was delicious and even MS with his “I don’t like seafood” attitude enjoyed it saying that it tasted much different to what he was expecting.  Not sure what he was expecting but apparently that wasn’t it.  And lastly was the Emu Carpaccio. Hmmm, I wasn’t a fan and neither was MS.  I think it tasted a little like an old boot, not that I am prone to the odd boot but if I was I think that is what it would taste like.  I think that the Australian Antipasto Tasting Plate is just a bit of a gimmick for the tourists who want to sample Australia’s unique wildlife and I’m not just talking visually here.  I’m glad we tried it but I wouldn’t order it again.

Next entree was the Twice Cooked Pork Belly, Seared Queensland Scallops with Davidson Plum Jam and Cauliflower Puree.  We both really enjoyed this dish. The only problem with it was that it was too small and we were both left wanting more. MS gobbled up two of the scallops so quickly I was left wondering if he actually knew that scallops came from the ocean. Apparently he did and apparently he also liked them.  Hmmm I am beginning to think that this whole “I don’t like seafood” thing is a bit of a sham. Underneath the scallops was a cauliflower puree which was light, fluffy and oh so tasty. The pork belly was delicious and tender and the Davidson Plum sauce that was underneath these tender morsels was beautiful and rich.  The Davidson Plum Jam was so good that I nearly licked remainder clean off the plate.

Next up were our mains, which after our entree plates were cleared took easily less than 15 minutes to arrive.  Again, the presentation of the main dishes was exceptional but I was left with meal envy when I saw what MS had in front of him.  Don’t get me wrong my bugs looked amazing but his lamb looked insanely good and tasted as good as it looked.  The pieces of lamb were super tender and cooked to perfection (slightly rare) along with the delicious date and sultana salsa that matched it so well. It was quite a decent serve for a main. Not at all what either of us were expecting after the size of the entrees.  MS really enjoyed his lamb and so did I.

My expertly cooked bugs were fantastic.  They were not at all overcooked and were plump and juicy with crispy tempura on the outside that was not overly oily.  MS had a taste and decided that not only did this non seafood lover like scallops but apparently he liked bugs too. The sweet, tender bug meat was a perfect match for the papaya salad which it was placed on top of.  I loved this dish because it was cooked so delicately and even though it was fried it wasn’t too heavy.  The serving size was also quite decent and not lacking in any respect.

Both MS and I enjoyed our main meals at Ochre along with one of our entrees (the scallop and pork belly one). You can keep the emu and crocodile as it seems that eating Australia’s coat of arms just isn’t my thing. Still I am prone to the odd Kangaroo steak at home but we won’t go into that.  The service at Ochre was fantastic, the food just one step down from outstanding and the prices were very reasonable for a fine dining restaurant which is why Ochre has certainly stood the test of time in what is a struggling Cairns economy. Having finally had a chance dine at Ochre I have to say it that it wasn’t everything that I had hoped that it would be. It didn’t blow my socks off.  After reading some reviews I was expecting Ochre to be my new number one restaurant in Cairns but it didn’t quite make it to that coveted position. What is my number one restaurant in Cairns you ask? Well, sadly I am yet to find a restaurant that ticks all the boxes, and ticks them well. In the meantime, I’ll keep you posted.

Posted on May 19, 2012, in Cairns and tagged Australian, Dinner, Table 52. Bookmark the permalink. 2 Comments.