Ever After Bookshop Cafe, Cairns City *CLOSED DOWN*

I had to write a quick post about a cafe that I had the pleasure of lunching at yesterday… Ever After Bookshop Cafe.  Yes, I know it’s been around for ages and blah blah blah but I honestly haven’t had a chance to get there before now since my busy schedule only allows me to arrive there at closing time.  Yeah ok if you call going to the gym at 9.30 am and then eating breakfast at 11.30 am a busy schedule then I’m flat out like a lizard drinking but enough about me lets talk about the Ever After Bookshop Cafe. 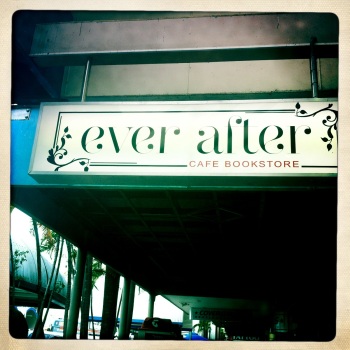 MS and I somehow managed to pop into this bustling little cafe for lunch on Wednesday and were both a little taken aback at just how many people were in there for lunch.  It was flat out around the counter and the coffee machine yet the staff still managed to maintain their composure and control to a point where I was overly impressed at the situation.  Pretty much as soon as MS and I walked into Ever After we were greeted by a friendly staff member behind the counter who then began to rattle off all the specials they had in the window, none of which I can remember because I didn’t even realise that she was talking to us.  Due to the fact that I am shall we say vertically challenged I could only see the top of her head over the counter so it wasn’t until she was finished her speel that I realised that she was in fact talking to the two of us.  Never mind that’s my own fault and although the rolls in the ‘window’ did look very inviting again I’m trying to limit my carbohydrate intake (I like to keep telling myself that anyway) so I decided almost straight away that I was going to have a wrap.  Ever After has daily specials as well as more yummy items on their double-sided menu including salads, burgers and sandwiches.

The owner of the cafe, Nick I think his name is, took over while we placed our order and even though we ummed and ahhed and took something off one of the wraps he never seemed annoyed or tried to hurry us at all.  Again, I’m impressed.  MS ordered a Chicken Schnitzel Wrap with Golden Crumbed Chicken Breast, Cheese, Tomato, Salad Leaves, Aioli and Chilli Sauce (hold the chilli sauce) for AU$7.50 while I went with the Roast Beef Wrap with Tender Beef, Caramelised Onions, Cheese, Tomato, Salad Leaves, Red Onion and Chutney also for AU$7.50.  I ordered a Chai Latte and we took a seat at the last available table which was outside in the arcade to read the latest edition of the Cairns Eye but not before one of the attentive staff made some room for us at the big table inside which we kindly refused.  Even though we were concealed outside in the arcade away from the main thoroughfare of Ever After staff we still weren’t forgotten about and a waitress bought us a bottle of water and some glasses, even though we didn’t ask for it.  Pretty soon my Chai Latte was presented to me in a tea pot with a glass and I do have to say despite my previous post about Jamaica Blue the Chai Latte at Ever After is pretty damn good.  So good in fact I would have to say the second best Chai Latte in Cairns.  Not long after my Chai Latte our wraps arrived.  Freshly made, good size and full of tasty fillings we both really enjoyed our wraps, so much so we tried to go back for more today but we didn’t make it there before closing time.  Out of the two wraps though mine was definitely the best and MS had a little bit of wrap envy when he tasted it not to say that his wasn’t delicious but I think the Caramelised Onions on my Beef Wrap ‘made it’ for the both of us. 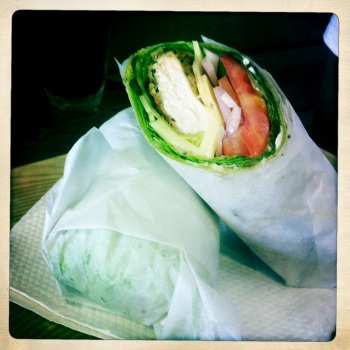 Not only were the wraps awesome but MS and I were both surprised at the short amount of time that it took between ordering our food and drinks at the counter and the time we were actually served.  Not only that but the service that we received from not just one but all of the staff was impressive and without fault.  Even with the hustle and bustle going on around them none of the staff missed a beat.  They even smiled as they served us.  It may not sound like that much of an impressive feat but if you eat out even half as much as I do in Cairns then you should know that good service like this is damn hard to find.  I’ll certainly be back for another wrap and another serve of some good old fashioned service.  The super cheap menu no doubt is another reason why the place was packed with lunch-goers when we turned up since surely these people like me get sick and tired of paying AU$15 for a wrap or salad at many other cafes around Cairns.  Seems good service does still exist in the Cairns CBD.  Ever After Bookshop Cafe you are a breath of fresh air!

Posted on May 4, 2012, in Cairns and tagged City Centre, Lunch, Not open anymore. Bookmark the permalink. 3 Comments.