I’m loving the amount of lunch specials that are available in Cairns at the moment. There really are so many to choose from thats it’s hard to keep track of them all (check out my ‘Lunch’ page). Having dined at both Splash and The Raw Prawn I decided that after walking past many, many times I would finally give Barnacle Bill’s a go. Last Friday I dined there with a group of friends and knew that some of the people that I was dining with had well, simple tastes. I guess this is why I chose Barnacle Bill’s in the first place for our Friday lunch catch-up. Still, there is something on the menu for everyone so I think this is why Barnacle Bill’s is always so busy at lunch time. Another reason is because they split the bill, which is perfect for group and business lunches and hard to find at Cairns restaurants.

I perused the menu and went with the Barramundi and Salad (Estuary Fish in Tempura Batter Served with Salad) but I’ll be honest there wasn’t really anything on the menu that excited me. Nothing on the menu stood out to me and made me think ‘That’s what I’m ordering!’ Our meals arrived in ample time. FW and TT also ordered the same dish as I did while across from me HT ordered the Pasta of the Day, which was a Creamy Salmon number. It was quite a large serve of pasta especially considering it was only $16.90 but HT claimed it was very bland. I tasted it and it was very bland. Half a bottle of Tabasco Sauce would have made it a little more worthwhile but then again everything tastes good with Tabasco Sauce.

Pasta of the Day – Creamy Salmon Pasta with Artichokes

My meal, as the menu explained it, was just two pieces of fish on a plate with a bit of salad and a very light soy type sauce that pretty much dissolved into nothing when I poured it over the fish. A bit of an odd sauce to have with tempura fish I think. Aioli or the old favourite Tartare Sauce would have been more memorable. The barramundi was cooked well and tasted nice and fresh. The batter encasing the fish was crisp and golden. I just wasn’t feeling it I guess. It must be said that FW and TT enjoyed their Barramundi and Salad lunch more than I did. 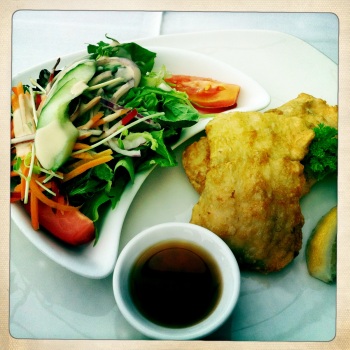 The menu at Barnacle Bill’s is varied but boring. There is 14 different dishes to choose from for $16.90 each and with menu items like Lasagna, Beef Curry, and Tandoori Chicken Pizza it certainly caters for the non-seafood eaters. Another possible reason why Barnacle Bill’s is such a popular lunch spot. The service was very good and the waiters were very jovial and chatty which is always nice when dining out since I have encountered some super miserable retaurant staff in recent times around Cairns. I guess my beef with the place is that I don’t think it’s anything special. I don’t understand why it’s so damn busy. I know that Barnacle Bill’s has been around nearly longer than I have so they must be doing something right but in my view the two restaurants on either side that I mentioned at the beginning of this post serve better food. It’s as simple as that. Barnacle Bill’s doesn’t need my endorsement. They seem to be doing pretty well already.

Opening Hours: Lunch from 11.30 am daily and Dinner from 5 pm till late