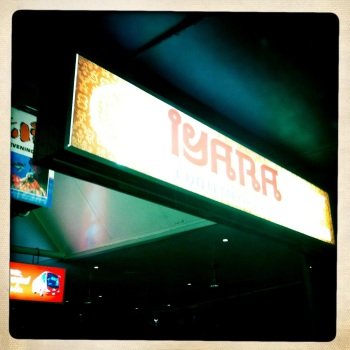 Another Friday night and another attempt by my friends and I to stay away from the pubs and clubs.  This time we decided to go to Iyara Restaurant and Bar upstairs at what used to be (back in the day) The Chapel.  I dined at Iyara about a year ago and found the food delicious so I thought it was worthy of another visit.  On arrival we were greeted by the owner Feng who we chatted with about the mysteries of the universe while we ordered some drinks from the Drinks Menu.  JM and FM decided to stick with the risque jug of water while myself and HH went for an alcoholic beverage each (beer and wine).  As is typical when dining with HH we go ‘the whole hog’ as the saying goes, no expense spared and its always a pleasure.  We asked our host to choose 4 entree meals for us followed by 4 mains.  He asked if there was anything that we particularly wanted to try and I mentioned a Chicken and Lemongrass dish that I had spied on the list of mains that sounded particularly tasty, other than that Feng had free range to choose our dishes for us.

One of the best things about Iyara Restaurant and Bar is the decor and the view.  We were seated out on the balcony, overlooking the esplanade.  The city was alive with people strolling along the foreshore and the full moon rising against the mountain backdrop.  Inside, the atmosphere in the restaurant is relaxing yet classy with candles flickering, comfy couches, oriental vases and sleek wooden floors.  It didn’t take long for our entrees to arrive and it wasn’t just my camera (ok iPhone) that emerged to take photos of them.  The entrees looked and tasted delicious.  Feng gave us a rundown of the entrees that he has selected for us paying particular attention to the Mieng Kham – Betel Leaf Served with Shrimp, Coconut, Ginger, Peanut, Chilli and Fresh Lime (AU$15).  He told us that this entree either needed to be eaten first or last to truly taste the dish.  Since it looked so good, it got eaten first.  Everyone thought it was divine and I found myself a little sad that we only got one each.  Oh well, onto the other entrees.

Next entree was the Pla Hoy Shell – Thai Spicy Salad, Warm Scallop, Fresh Herbs, Lemongrass, Kaffir Lime Leaves and Mint (AU$18).  Each was served on a white porcelain appertizer spoon (i.e. just one mouthful) and the flavours of sweet, sour and chilli along with the plump, juicy scallop was the perfect blend for this delectable entree.

Next entree was the Goong Hom Pha – Prawn Wrapped in Rice Paper Served with Homemade Chilli Sauce (AU$16).  The prawns were nice and big and the rice paper wrapped around them was golden and crisp.  These entrees were so crispy I even ate the prawn tail (yum).  Again I found myself wishing that we didn’t just get to eat one each.

The last entree of the night was the Tod Mun Pla – Fish Cakes with Snake Bean, Lime Leaf, Crushed Peanut and Sweet Chilli Sauce (AU$17).  The fish cakes were, well, they tasted like any other Thai Fish Cakes that I have had.  Not to say that they weren’t yummy but compared to the other entrees they weren’t particularly exciting.

Now onto the mains…  They arrived in good time as we were only left waiting for about 20 minutes.  Along with my Chicken and Lemongrass dish (Gai Takroi) Feng had chosen us the Gaeng Massaman Neur – Rich Massaman Curry of Chuck Beef, Potato, Peanut and Shallot (AU$28), Pla Sam Rod – Boned Fried Whole Barramundi with a Hot, Sweet and Sour Sauce Garnished with Thai Basil (AU$34), Pad Pak – A Fresh Stir Fry of Green Asian Vegetables with Thai Basil (AU$19).  Feng served us each a portion of steamed Jasmine Rice each and we all tucked into the mains in front of us (sharing of course).  The Gai Takroi was placed closest to me so naturally I tried that one first.  The chicken served in bite sized pieces was succulent and tender.  Everyone enjoyed this dish.

I’ll be honest, I didn’t try the Stir fry vegetables for two reasons.  It was placed at the opposite end of the table so it was a bit out of reach (yeah, ok I could have asked FM to pass it up) and secondly because I just don’t like bean sprouts.  Again everyone else seemed to enjoy it but there was a little over half of it left by the end of the meal.  I can only guess this is because the other non-vegetarian dishes were well, non-vegetarian.

The Massaman Curry was probably my highlight of the dishes that Feng chose for us.  The meat was tender, the potato nice and soft and the sweet sauce was fantastic drizzled over my Jasmine Rice.  This dish was delicious but I do have a massive weak spot for Massaman Curry at the best of times.  HH and JM, however were also digging into this dish and enjoying it immensely so I guess it wasn’t just me.

Lastly, was the Whole Barramundi and wow did it look good.  Once again everyones cameras or phones came out to take a picture of the meal.  The Barramundi had been deep fried whole with bite sized pieces of fish fillet for us to share around.  Once that was gone however the crispy fish was broken into pieces and eaten skeleton and all by the four of us.  I asked Feng where he sourced the Barramundi from and he said that it was farmed Barramundi from Australia.  The reason that he bought farmed Barramundi to serve at Iyara is because of its bred to plate size (something I did actually already know but I thought I would ask anyway).

We all enjoyed our meal at Iyara Restaurant and Bar so much so that my friend FM was raving about the Barramundi for the next week until she went back and ordered it again.  The atmosphere is fantastic and would be a good choice for a romantic dinner on the balcony for two.  The service however was lacking in some areas and while our waters and drinks were topped up at the beginning of the night it seems we were forgotten about after that.  It was also very difficult to get anyones attention if you wanted another drink.  Feng however was a gratuitous and friendly host, it was more the rest of the staff that let down the service.  From the entrees to the mains the food was delicious but paying upward of AU$28 for a Thai dish is (I think) a little steep, especially when the service is lacking.  The restaurant was quite full on this particular Friday night but there was still plenty of room down the back for more diners.  If more people had come the three wait staff would not have been able to keep up at all considering they were struggling with the number of people already there.  If the service was improved I would have no problem paying the higher price for these meals but as it stands hmmm I think I might stick to the cheaper Thai restaurants in town.  But then again, that Massaman Curry was pretty damn good.